By Cora Harrington November 10, 2013 in featured 22 comments
Share this article 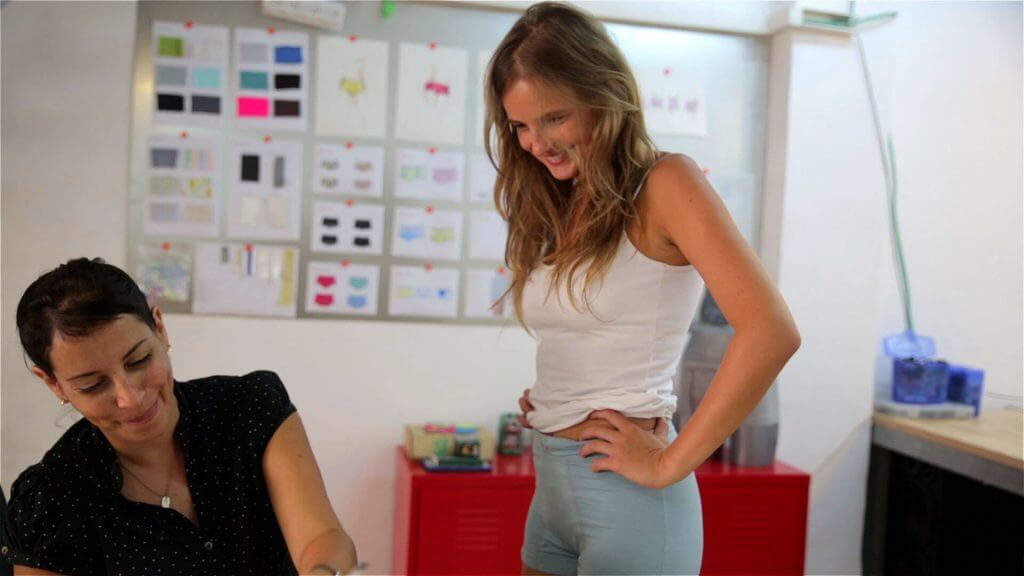 A few days ago, I ran across a tweet from Elisabeth Dale referencing a press release on AR Wear, a new company using Indiegogo to help finance a line of "rape prevention" underwear. I like to keep up with what's happening in the lingerie industry (even if I find the very concept of rape prevention underwear a problem for a lot. of. reasons.), but I probably wouldn't have even written this article if the worst thing I saw in that piece had been Lingerie Insight's erroneous claim that AR Wear won't receive any money if they fail to reach their goal (that's a rule for Kickstarter; if you use Indiegogo, you keep whatever you raise. Edit: A reader brought to my attention that this is not actually the case with the following statement: "On Indiegogo a project creator can actually choose either Flexible Funding or Fixed Funding. One type is flexible, and the other is all-or-nothing; it's up to the project creator which they choose for their campaign." Thanks!).

Instead, I was treated to some amazingly blasé myths about rape, which were not only flat-out wrong, but which can also help to perpetuate the kind of misinformation that makes it harder to be a sexual assault survivor. It bothers me that this company is not only using inaccurate statements as part of their marketing campaign, but also that these statements are being disseminated through major mainstream press (Mashable, Pando Daily, The International Business Times, among others) without any fact-checking or counter-balancing from actual research. And while sharing misinformation in an effort to sell a product is always morally questionable and unethical, it's especially so for this topic.

As someone who used to be a rape crisis counselor and is currently a lingerie blogger, both sides of this discussion matter to me. And there's a lot to be bothered by. The tagline is a bit of passive dreck (What in the world does "a clothing line offering wearable protection when things go wrong" even mean? It makes it sound like we're talking about tampons or knickers for incontinence... not sexual assault), and the actual campaign photography seems to imply that only a certain kind of person gets raped (namely: female, young, attractive, white and thin).

But the part of the campaign I want to focus on falls under the "Our Story" section as it vividly illustrates AR Wear's complete disregard for the extensive body of research on sexual assault and rape --- from patterns of victimization to the success of rape prevention strategies. This entire section consists of a selective reporting of facts, with AR Wear omitting critical information relevant to sexual assault... likely because it would make their campaign less successful. I am always bothered at how our industry picks and chooses which studies to pay attention to and how much weight to give them, but never moreso than right now. 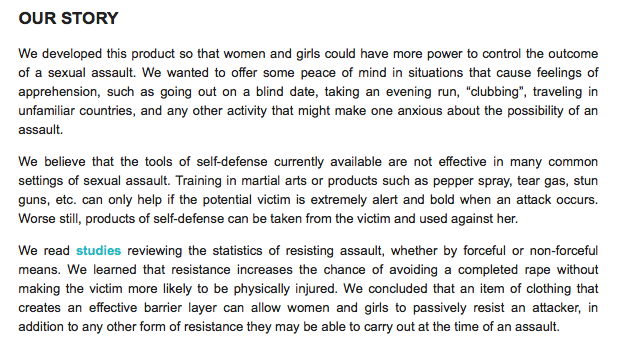 In case you are not able to view image, the text contained within it is copied and pasted below:

We developed this product so that women and girls could have more power to control the outcome of a sexual assault. We wanted to offer some peace of mind in situations that cause feelings of apprehension, such as going out on a blind date, taking an evening run, “clubbing”, traveling in unfamiliar countries, and any other activity that might make one anxious about the possibility of an assault.

We believe that the tools of self-defense currently available are not effective in many common settings of sexual assault. Training in martial arts or products such as pepper spray, tear gas, stun guns, etc. can only help if the potential victim is extremely alert and bold when an attack occurs. Worse still, products of self-defense can be taken from the victim and used against her.

We read studies reviewing the statistics of resisting assault, whether by forceful or non-forceful means. We learned that resistance increases the chance of avoiding a completed rape without making the victim more likely to be physically injured. We concluded that an item of clothing that creates an effective barrier layer can allow women and girls to passively resist an attacker, in addition to any other form of resistance they may be able to carry out at the time of an assault.

I understand the desire to come up with solutions. I understand the drive and desire to fix a "problem." However I don't understand trading in rape mythology to sell panties. Most sexual assaults are not committed by strangers (the blind dates, unfamiliar countries, clubs, etc. that AR Wear refers to above). Most rapes and sexual assaults are committed by someone the victim knows, in other words, someone she'd never consider wearing her anti-rape panties around. This is a solution that won't be helpful for the vast majority of sexual assault victims; however, it is incredibly helpful at implying, once again, that rape is a crime committed by people you don't know.

In the next paragraph, AR Wear shares their belief that self-defense strategies are ineffective for preventing sexual assault. Then, in the third paragraph, they share a link to a single study on rape resistance strategies. Obviously, the research on rape resistance is nuanced and complex, and I wouldn't expect any one company to relay all the possible findings from the data in an Indiegogo campaign. I also want to emphasize that, in discussing certain study findings here, I am not attempting to victim blame or imply that some women are somehow resisting rape in the "wrong" way. When you're being assaulted, you make the best decisions you can in that situation because the ultimate goal is survival. However, I find AR Wear's one solitary link to be a bit weak (and that's putting it mildly). Though now that I think of it, perhaps it was in everyone's interest that they didn't quote more studies, since they can't even effectively and accurately summarize the findings in the one they've quoted. In so many words, if you're going to talk about women's rape resistance strategies and make them the core part of your marketing campaign (a marketing campaign that has since gone viral), it's important to get your information right.

In their Indiegogo campaign, AR Wear states, correctly, that resistance is linked with lower rates of completed rape or sexual assault. Put another way, an attacker is less likely to follow through with a planned assault if the victim fights back. There are several different ways of resisting: forceful physical resistance (biting, scratching using a weapon, martial arts, etc.), nonforceful physical resistance (running away, struggling, defending the body, etc.), and nonforceful verbal resistance (begging, pleading, crying, screaming, etc.). Non-resistance (being passive, immobile, freezing, etc.) is also an option included within the study.

AR Wear says their "belief" is that self-defense strategies "are not effective in many common settings of sexual assault." Were they talking about acquaintance rape, there might actually be some truth to this. It can be harder to defend oneself against a sexual assault perpetrated by someone known and trusted. We're conditioned against "stranger danger" in our society, but no one really talks about the real stats behind rape victimization and perpetration. However, most people aren't going to to wear rape-preventing knickers around their friends, and AR Wear has already indicated with their first paragraph that this is a product geared towards stranger sexual assault. In that case, using the research they themselves have cited, physical resistance is actually a shockingly effective strategy... more effective than any other resistance method. Again, this isn't to imply that there's a "right" or "wrong" way of resisting; it's just that the research AR Wear is quoting is not in agreement with their claims.

In the third paragraph, AR Wear brings up the topic of passive resistance. The research they've chosen to share indicated that passive resistance is associated with higher rates of rape completion, but more than that, this entire paragraph reminded me of that 1999 Italian case, where a rape conviction was overturned because the judge ruled that attacker could not possibly have removed the victim's tight jeans without her consent. If a woman owns a pair of rape preventing underwear but she happens not to be wearing it that night (remember: most women are sexually assaulted by someone they know) or if she forgets to lock it back after using the bathroom or if her assailant tells her to take it off or get punched in the face or if she just says no after she's started sexual activity, will a court use the unlocked underwear as evidence of consent? And let's not forget that there's more to sexual assault than vaginal or anal penetration.

Rape survivors already face an extreme uphill battle in getting every level of the criminal justice system to take them seriously. Their character, their hobbies, their sexual history... a rape victim's entire life is put on trial in a way that victims of physical assault, robbery, and homicide are not. I don't see this garment as helping women; I see it as giving women something else they have to prove if they're sexually assaulted despite owning a pair of these ("I couldn't have raped her, your honor, she was wearing anti-rape panties!" or "You own anti-rape underwear. Why weren't you wearing it that night?"). Rape is about coercion, power, and control... not easy-access knickers. A pair of tight underwear will not "stop rape" any more effectively than a pair of tight jeans will. It may give added fodder to the defense of an accused rapist, but that really shouldn't be the goal here.

Women have to constantly deal with people implying that their clothing choices can increase or decrease their likelihood of being targeted for sexual assault, and sexual assault survivors already have to deal with people attempting to place the blame for their assault on them. Let's not "make it official" with products like this. Yes, rape is always the assailant's fault, but when it comes to sharing rape misinformation, AR Wear absolutely shares some of the blame.