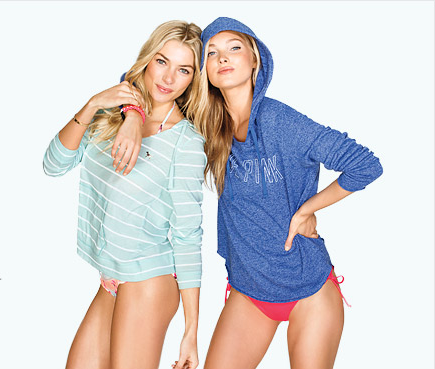 About a month ago, while I was still away on my honeymoon, I got a ton of e-mails from people asking what I thought about Victoria's Secret's controversial new "Bright Young Things" collection. Though it's old news by now, I wanted to discuss it anyway because I think this entire story (and, more importantly, people's responses to it) brought up a lot of the issues I have with the way we discuss lingerie in America.

The Bright Young Things collection was part of Victoria's Secret's PINK line, which debuted in 2002 and targets 15-22 year-olds. The story went viral after a father posted a "Letter to Victoria's Secret," and a Facebook page dedicated to taking down the campaign was also popular for a short while. Though I was watching the story develop from afar, I couldn't help but think, "What's wrong with teenagers and young women wanting to wear cute underwear?" This excerpt from the father's letter linked above stuck out to me in particular.

I want my daughter (and every girl) to be faced with tough decisions in her formative years of adolescence. Decisions like should I be a doctor or a lawyer? Should I take calculus as a junior or a senior? Do I want to go to Texas A&M or University of Texas or some Ivy League School? Should I raise awareness for slave trafficking or lack of water in developing nations? There are many, many more questions that all young women should be asking themselves… not will a boy (or girl) like me if I wear a “call me” thong?

I admit, I'm not a parent, so my perspective on this is likely going to be a bit different from the parents reading this. But I'm not too far removed from PINK's target age range, and though it's not popular to say so, I bought a LOT of my first 'grown-up' bras from Victoria's Secret. And I can tell you right now, as a broke college student who purchased a ton of inexpensive PINK, I never felt like I was deciding between graduating from college or wearing sexy lingerie. A young woman's mind is not so fragile that a bit of lacy underwear will completely ruin her brain.

I know this is an issue many people feel strongly about, and I understand why, but exploring gender and sexuality through dress is what teenagers do. Developing an independent identity... figuring out what they like (and don't like) is pretty much the job of a teenager or young adult. And teenagers don't want to wear the same bras their Moms are wearing. Why should buying cute underwear be any more scandalous or shocking than buying makeup or high heels?

Obviously, it is entirely possible to want to wear nice lingerie, and yet not be ready to engage in sexual activity (at least I would hope that's obvious). But besides that, even if a teenager is sexually active, is it really okay to teach young women that self-respect and sex are mutually exclusive? That you can either go to college or wear a push-up bra? That you can either save the world or wear lacy underwear? No, I don't think so.

I honestly hate panties with words on the back, but this entire event reminded me of is how lingerie is always connected to sex in our culture. Pretty lingerie is never for a woman to enjoy for herself; it's always for someone else to look at.

Lingerie does not always have to be about the boudoir. Yes, it's fine if it is, but why aren't we telling young women that you can totally buy that lacy bra and panty set just for you? No one else has to see it. You don't have to be in a relationship. You don't have to show it off. You can buy this beautiful lingerie and be completely, awesomely selfish about it, and wear it all by yourself. And that's not only okay, it's wonderful. Why are we scolding and shaming teenagers for their interest in lingerie instead of encouraging them to view it as another, healthy aspect of their self-expression and personal style?

When it comes to Victoria's Secret's marketing and messaging, I think we should absolutely challenge the imagery they put out there. But there are ways to critique the method VS uses to sell lingerie without slut-shaming young women. I don't like the assumption that a teenager who wears panties with words on the back somehow doesn't value herself. A thoughtful conversation on lingerie doesn't require references to "sluts" and "whores" (language the Facebook page I linked to used way too frequently). Teaching young women to respect themselves and their bodies shouldn't come from a place of teaching them their sexuality is bad.

Make no mistake, I'm all for valuing the complete woman. I just with society would stop implying that a young woman's lingerie choices somehow make her less "complete."