Note: This lingerie was purchased with my own money. All opinions are my own. 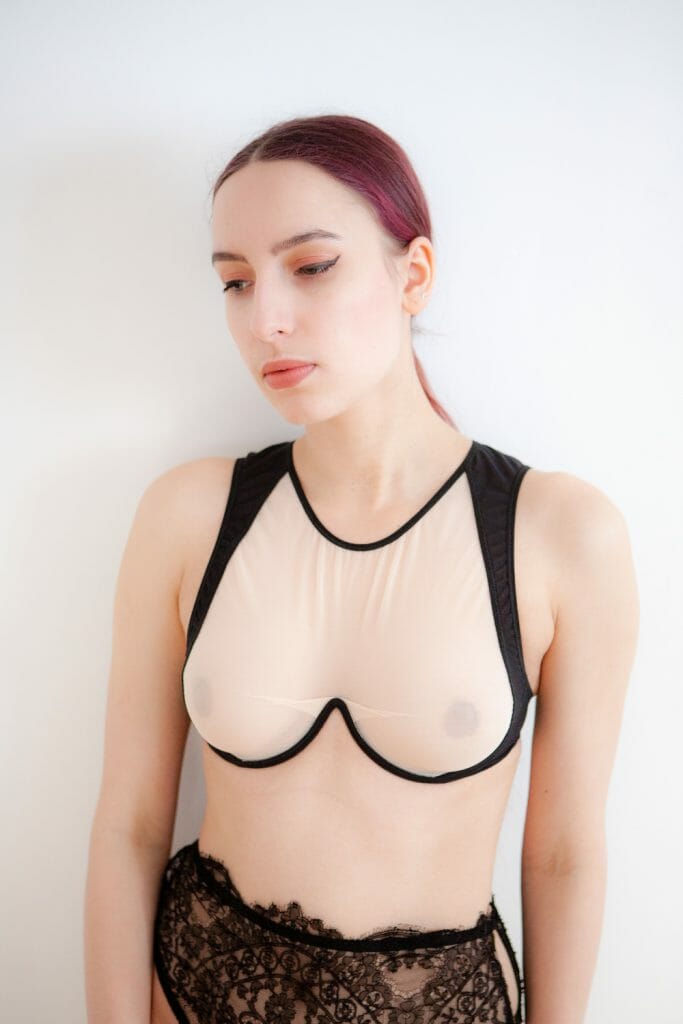 I first discovered La Fille d’O way back in 2012 at the Salon de la Lingerie tradeshow. This was one of my first forays into the industry side of lingerie, and the brand’s graphic designs and unusual shapes made a big impression.

Although for a long time the label was firmly out of my budget, I adored the aesthetic and silhouettes...particularly the use of monowires and wire separators in bras - components that used to be commonplace in the 1950s but have now fallen almost completely out of use in contemporary lingerie.

Though I still enjoy the brand’s aesthetics, my personal opinion of them was shaken a year or so ago after their founder referenced lingerie making someone look like ‘a slut with a pea for a brain’. It seemed a little incongruous for a label that presents itself as feminist and sex positive to make this kind of sweeping judgement. Nevertheless, when the ‘Bears’ bra turned up in a sale with only my size left, curiosity got the better of me. This was a brand I admired for years, and I wanted to see if the quality of the product lined up with the aesthetic. 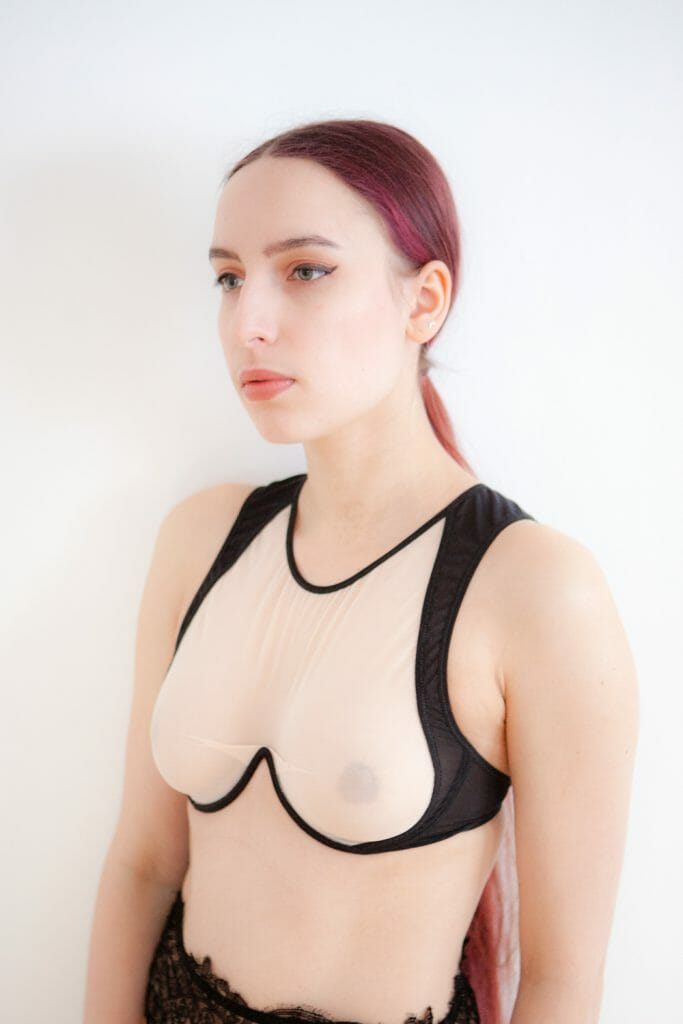 The bra is comprised of a stretch nylon mesh in alternating panels of black and pale peach. The peach tone appears ‘nude’ against pale skintones, but it’s disheartening to see the brand refer to the colour as ‘skin.' It’s disappointingly standard practice for the lingerie industry to use this kind of exclusionary language for garment colours. 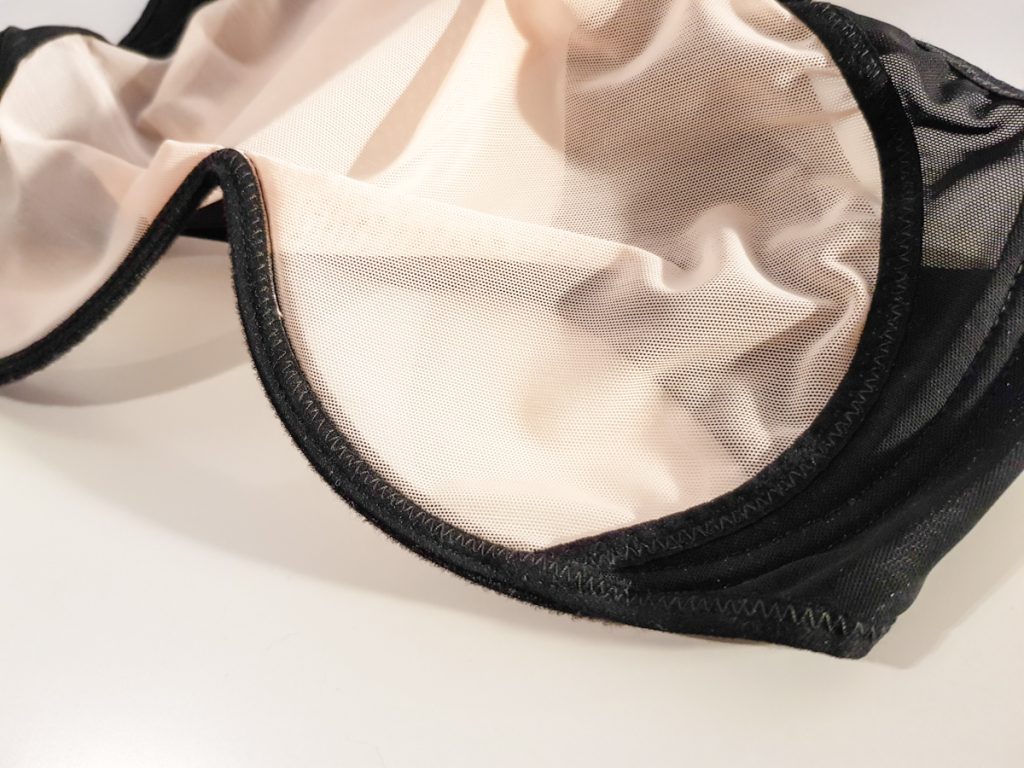 The raw fabric edges at the neckline and underband are encased in contrast black foldover elastic binding, which gives a clean and graphic finish. 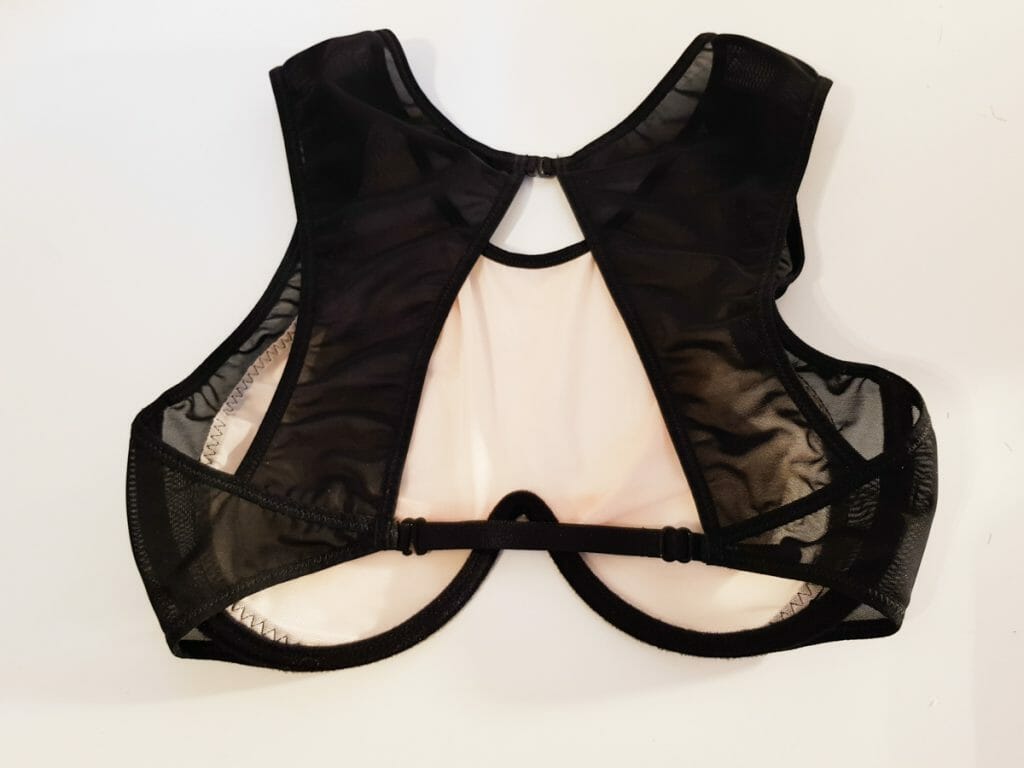 The bra does not have shoulder straps, but is constructed not unlike a vest top with built-in shoulders. It fastens between the shoulder blades with a single black enamelled metal hook, and at the back underband with an adjustable satin strap.

The bra gets its structure from a monowire. Unlike standard underwires, these are joined at the centre and ‘curve’ around the body rather than lying flat. The bust shaping is achieved with two darts folded (rather than stitched) into the fabric at the centre front. 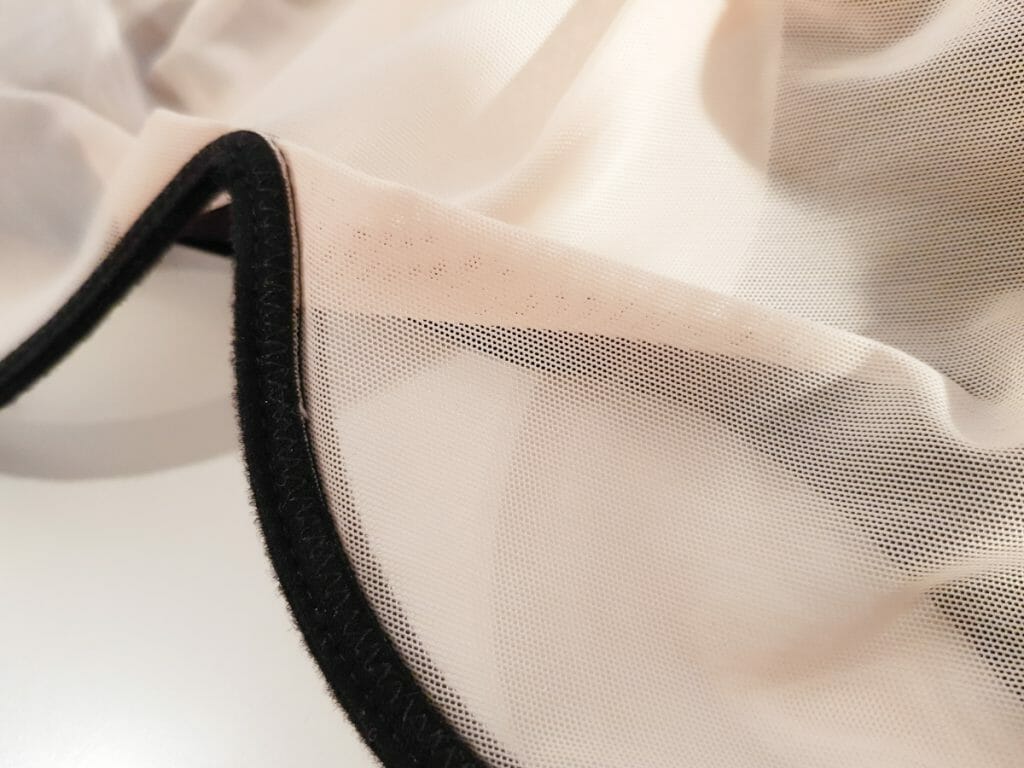 The stitching is of a very high standard overall, with clean and accurate stitching. Elastics are applied with a narrow zigzag stitch and the underwire casing with a lockstitch.

I’m particularly impressed with how neatly the underwire channel has been stitched. The monowire has some dramatic curves that require a lot of stitching skill to execute cleanly. There is a small line of visible black top stitching right at the join of the peach mesh. I suspect this was unavoidable, and it isn't really noticeable if you're not looking closely at the bra. 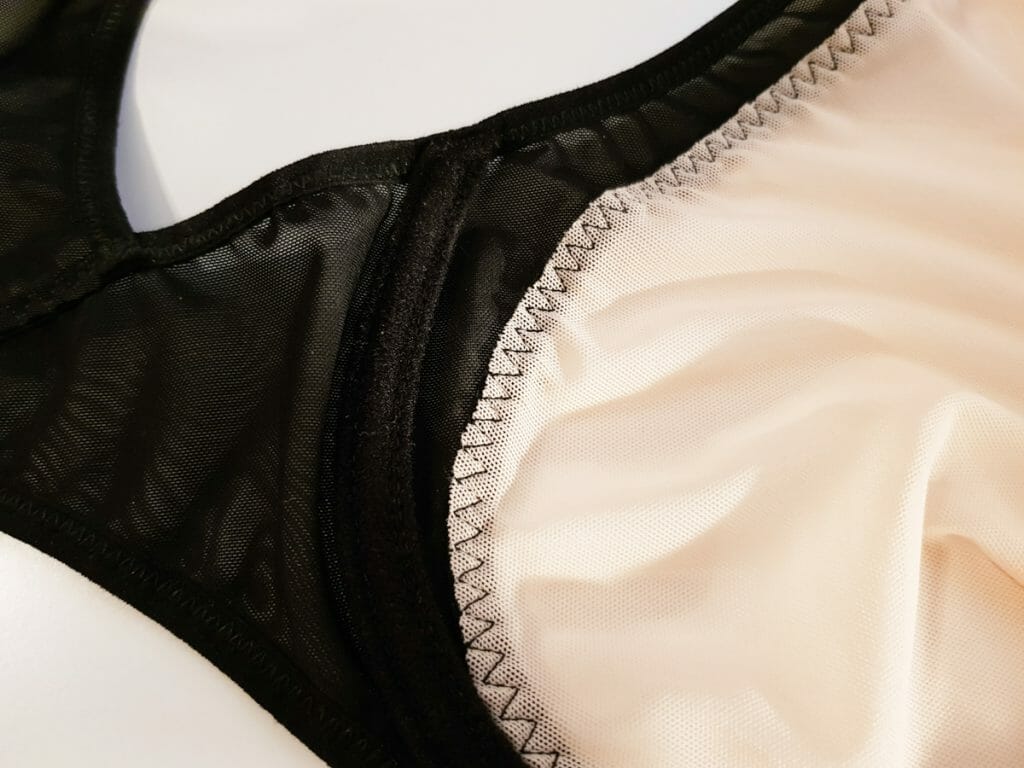 There is one puzzling construction choice. Rather than traditional seams, different panels of fabric are appliquéd on top of each other with a 3-point zigzag with the exterior fabric layer raw edge encased in foldover elastic. It’s difficult to explain how this has been done or why, but it means that there is a raw edge of fabric left on the interior of the garment. It’s very neatly done and the stretch mesh isn’t likely to fray, but I am curious as to how this garment would hold up with long term wear.

Leaving raw edges in a stretch fabric seam that will be under tension during wear is not personally a construction method that I would choose. My guess is that this seaming method would produce the smoothest finish possible with the least bulk. The garment was sewn in Belgium in the brand’s own production unit. 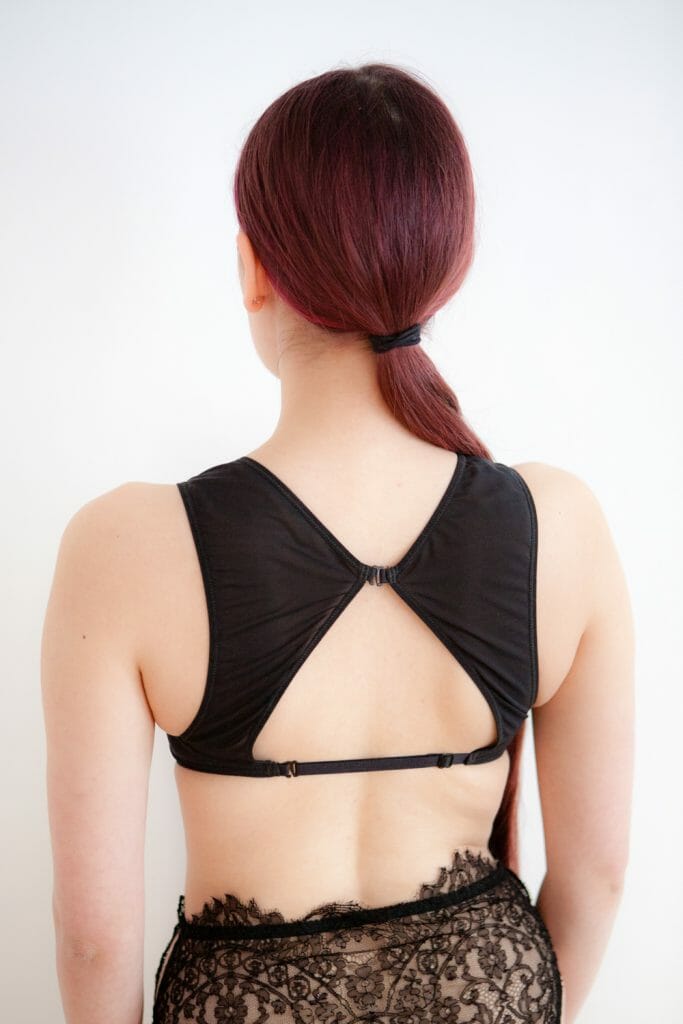 I was disappointed by the fit of this garment, both from the perspective of how it looks and how it feels. I found the monowire uncomfortable, verging on painful with extended wear. The wire doesn’t work well with my figure and feels very unflexible, with the centre ‘^’ and underarms digging in.

Because the bra fastens with a very narrow elastic strap, there isn’t much tension on the band so the wire doesn’t ‘spring’ like in traditional bras. The wire also feels like it has a particularly wide profile, better suited for those with wide and shallow breasts. 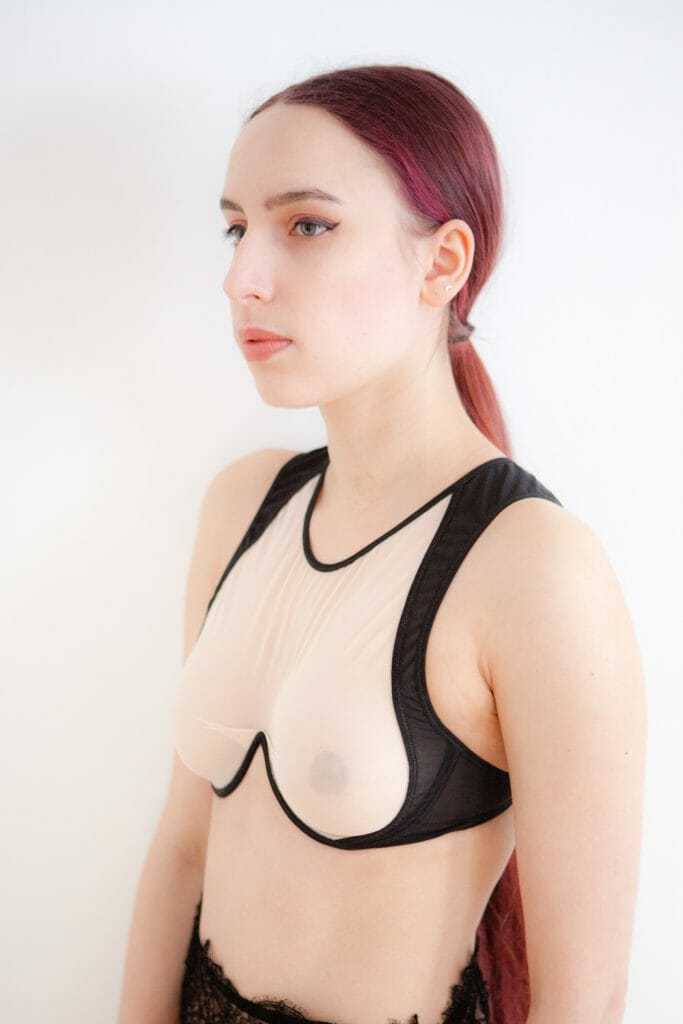 The cut of the bra doesn’t work well with my bust shape, which is fuller on the bottom. Because the darts are folded into the fabric rather than stitched, they distort and  stretch out under the weight of my bust (which is further compounded by the fact that the mesh is extremely stretchy and unsupportive). From the side, it gives a very flattened silhouette. It’s definitely a style that’s better suited for smaller and shallower busts.

The newer ‘Quite Like’ bra design appears almost identical to ‘Bears’, with the exception of the bust darts. In the new design these have been moved to sit vertically at the centre of the bust, rather than emerging from the centre gore. I suspect this new design will have a much improved fit.

If I didn’t find the bra so uncomfortable, I’m sure I’d still wear it lots to style with outerwear. The high neck and graphic panelling look amazing under low cut and sheer tops. From the perspective of styling versatility, La Fille d’O’s designs are pretty unparalleled. You’re paying for the design, and that’s something this excels at.