Why Lingerie Addicts Should Care About SESTA/FOSTA

Why Lingerie Addicts Should Care About SESTA/FOSTA

Today's guest post is by Rose. Rose recently received an MFA from Virginia Commonwealth University and is a former columnist at The Lingerie Addict. You can read more of her work at roseszabo.com, or follow her on twitter, @rosewednesday. 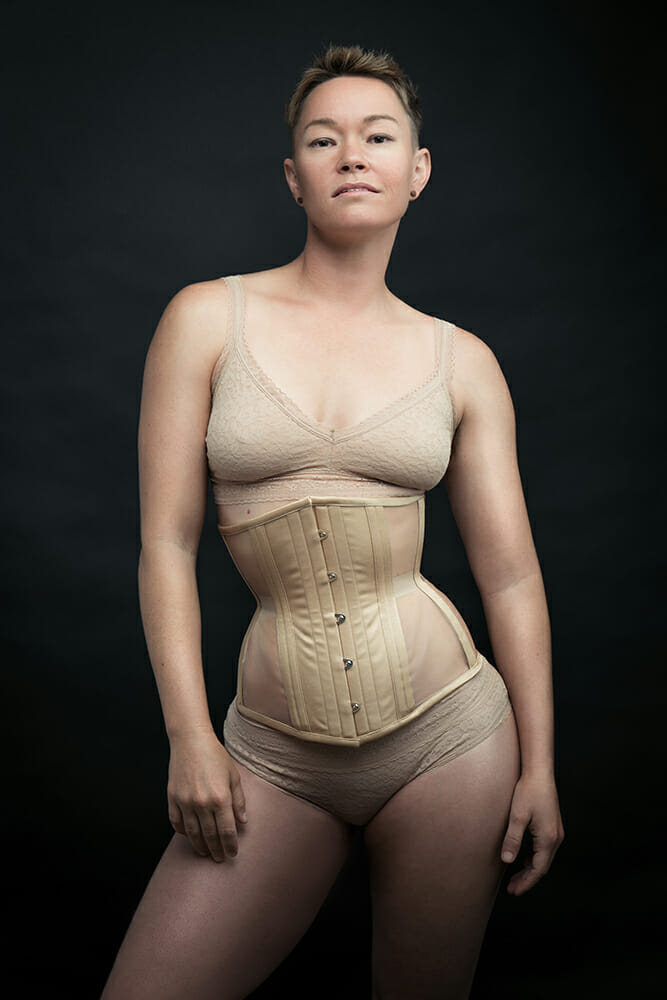 The wording of these bills, however, conflates sex trafficking with consensual sex work, and prohibits any language that might “promote or facilitate prostitution.”

But what does SESTA/FOSTA, a bill that censors sex work talk on the Internet, have to do with lingerie? The answer is: a lot. When people censor sex workers on the Internet, this affects the lingerie community, because:

Policies that Censor Sexual Expression Lead to Censorship of Lingerie. 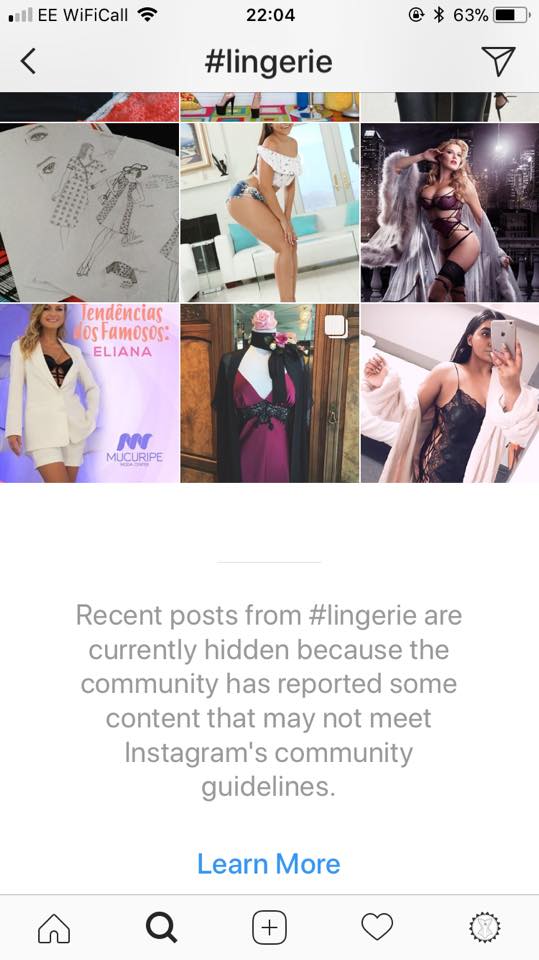 Screenshot from Instagram in which lingerie-tagged posts are all hidden. With SESTA/FOSTA, sites will likely be more prone to censoring “inappropriate content” to err on the safe side and avoid federal prosecution.

SESTA/FOSTA negatively impacts freedom of expression, which will certainly create hardships for the lingerie world. Although lingerie is not inherently pornographic, people often conflate lingerie with pornography. The culture at large sees liking lingerie as sexual, and as a result, when “sexual content” gets censored, lingerie gets censored too.

Social media platforms are notorious for censoring lingerie-related content. Facebook is known for its strict-but-irregularly-applied rules about nudity. Instagram’s are similar. Of course, not all lingerie images display nudity, but lingerie ads are still frequently considered sexual. 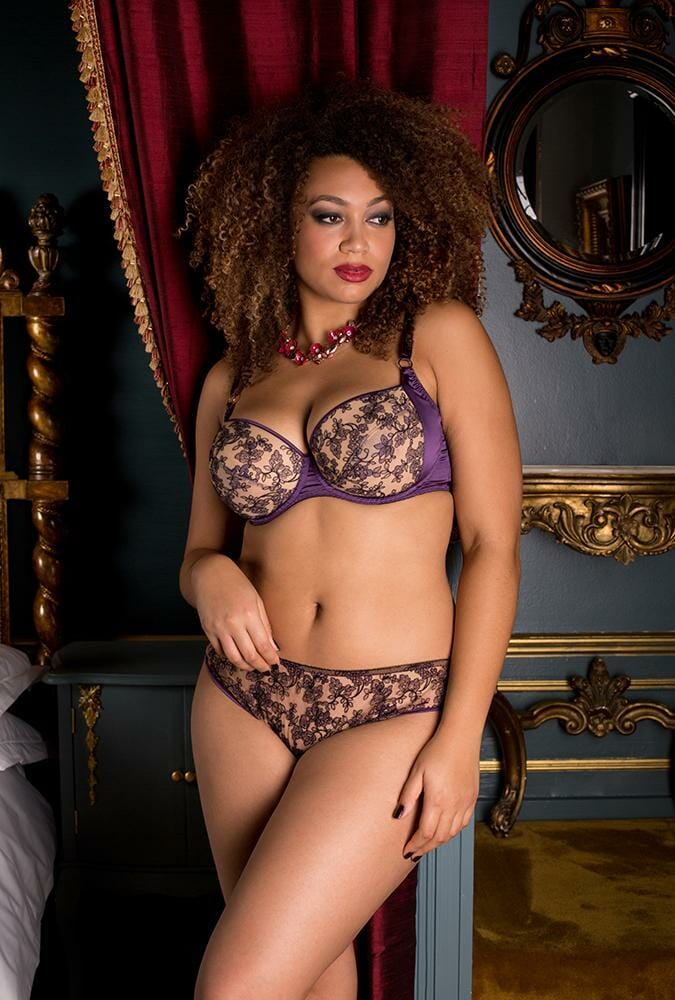 Lingerie brand Harlow & Fox reports having their website censored as “adult content”, although most of their images do not fit standard definitions of nudity. Via Harlow & Fox.

The lingerie brand Harlow & Fox mentioned being their entire website being blocked as “adult content” on public networks, while Studio Pia and online retailer Bluestockings Boutique both mentioned having their promoted posts on Facebook rejected as inappropriate.

A spokesperson for Playful Promises added that even when using paid advertising services, “We have also had our ads completely rejected...There is never anyone to talk to at these services that can help us, and answers have been frustratingly vague or completely different from person to person.”

Lingerie posts can follow all of the officially-stated rules about what is and isn’t allowed and still be seen as inappropriate. As Bluestockings phrased it: “lingerie is a sex-adjacent industry and...too many platforms - Pinterest, Facebook - lump us in with Adult Content.” They also noted that ads featuring LGBTQ+ content were rejected more often. This highlights how arbitrary censorship can be, since LGBTQ+ content isn’t illegal or in violation of any official site policy. 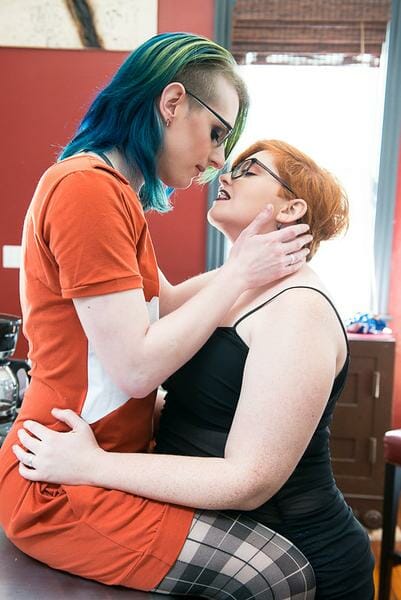 Images of LGBTQ folks in lingerie are frequently censored on social media. Under SESTA/FOSTA, that censorship will likely increase. Via Bluestockings.

It might be easy to assume that a law that specifically targets sex work won’t affect people who don’t practice sex work. But when laws get passed restricting sexual expression, the outer edge of what’s considered acceptable gets moved back. And with SESTA/FOSTA restricting freedom of expression on the Internet, websites (like Craigslist and Reddit) are changing their rules to crack down preemptively on any content that they worry could get them in trouble.

As Kitty Stryker points out, websites “could easily misinterpret the vague wording of the bills to mean they should censor content deemed ‘sexual,’ or implement automatic filters to delete content (or users) deemed 'questionable'."

This new legislation will likely lead to even more of this kind of censorship. With SESTA/FOSTA, “the legislation is vague enough that even sex-adjacent subjects or websites/business are vulnerable to be shut down or worse- civil or criminal liability,” says Bella Vendetta. 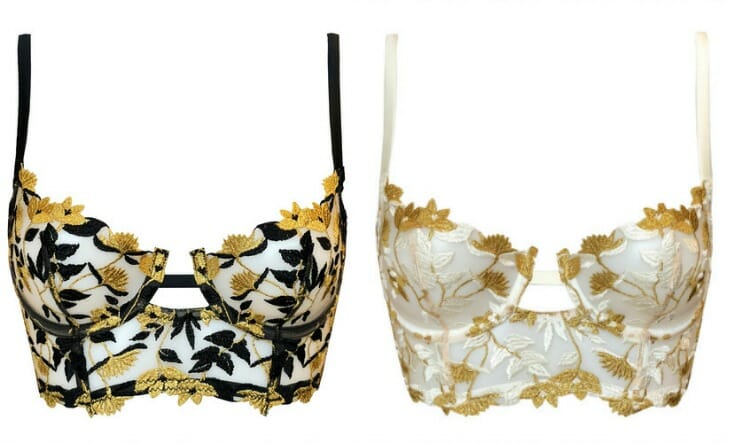 Studio Pia Soraya Longline Bras. Studio Pia is a brand that is known for using sex workers in their social media marketing.

Not all lingerie content will be affected in the same way, of course. We know from precedent that everything from dress codes to social media policies are enforced more harshly against marginalized groups. Chances are good that diverse lingerie content - featuring people of color, LGBTQ people, and models of different sizes - will be affected more frequently than posts featuring images of conventional white, thin models.

So if you enjoy posting or seeing diversity in lingerie, the long-term impact of SESTA/FOSTA is likely to make that content less visible while disproportionately punishing its creators. As Playful Promises noted, “The implication that sex workers are 'dirty' leads into the belief that a woman’s body is ‘dirty’ - a slippery slope into the policing of our sexuality. This is an important issue that the lingerie industry should be taking more notice of.”

But aside from its potential impact on the lingerie community at large, it’s important that lingerie lovers be aware of the impact of SESTA/FOSTA on the group most affected: sex workers. Because:

Sex Workers are a Vital Part of the Lingerie Community’s Past and Present. 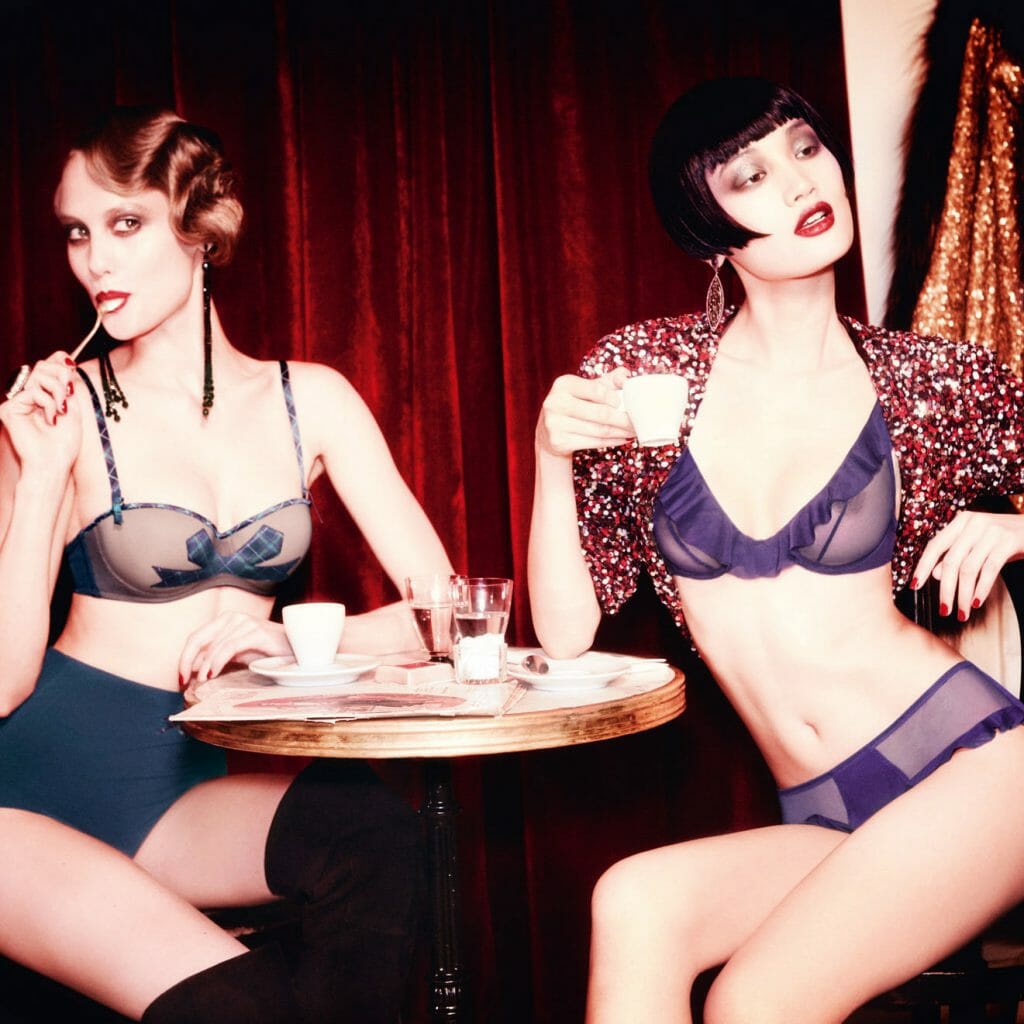 Designers like Chantal Thomass frequently draw on the history of sex work--in this case, the lingerie, hairstyles, and background scene are reminiscent of the tradition of cabaret.

As this piece by Datura Divine points out, sex work and sex workers are a frequent theme in lingerie ads. In styled shoots and promo images, lingerie models pose in storefront settings reminiscent of Amsterdam’s Red Light District, or rendezvous with half-dressed men in hotel rooms, or pole dance, or hold whips. 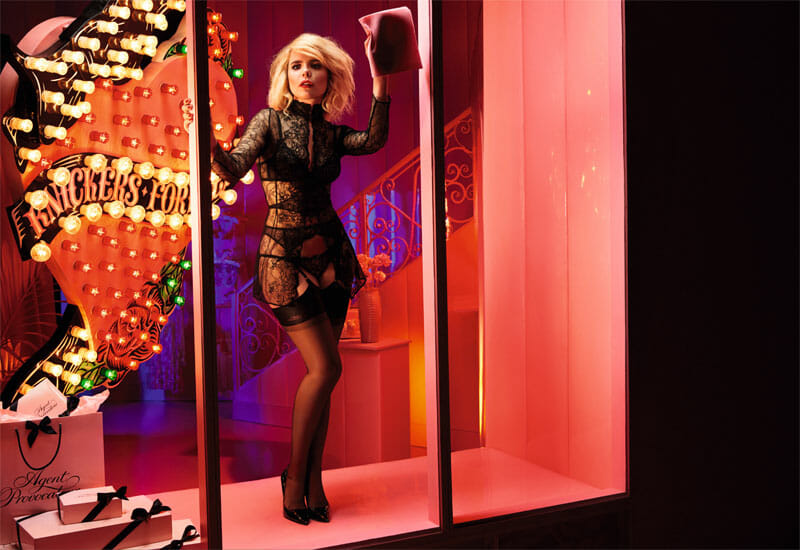 As Datura points out, brands often play off of the illicit eroticism of sex work in order to tantalize customers. Many of these collections portray sex work as sensuous and desirable - perhaps even “promoting” it, if one were to use the language of SESTA/FOSTA. While it’s unlikely that lingerie companies will be prosecuted federally for “promoting prostitution," more brands should consider standing in solidarity with the sex workers who consistently provide them with inspiration.

Brands that have expressed acceptance or solidarity with sex workers have additionally benefited from a strong customer base. Studio Pia notes that when they have shared images from a sex worker wearing their designs in a photo shoot, “This post alone was responsible for a considerable spike in website traffic and subsequent sales from both sex workers and non sex workers.”

Sex workers often have a compelling personal brand that comes with, as professional dominant Bella Vendetta describes it, “a built in fierce fan base." Studio Pia anticipates that as sex workers lose income due to SESTA/FOSTA, brands with sex worker client bases will suffer as well. 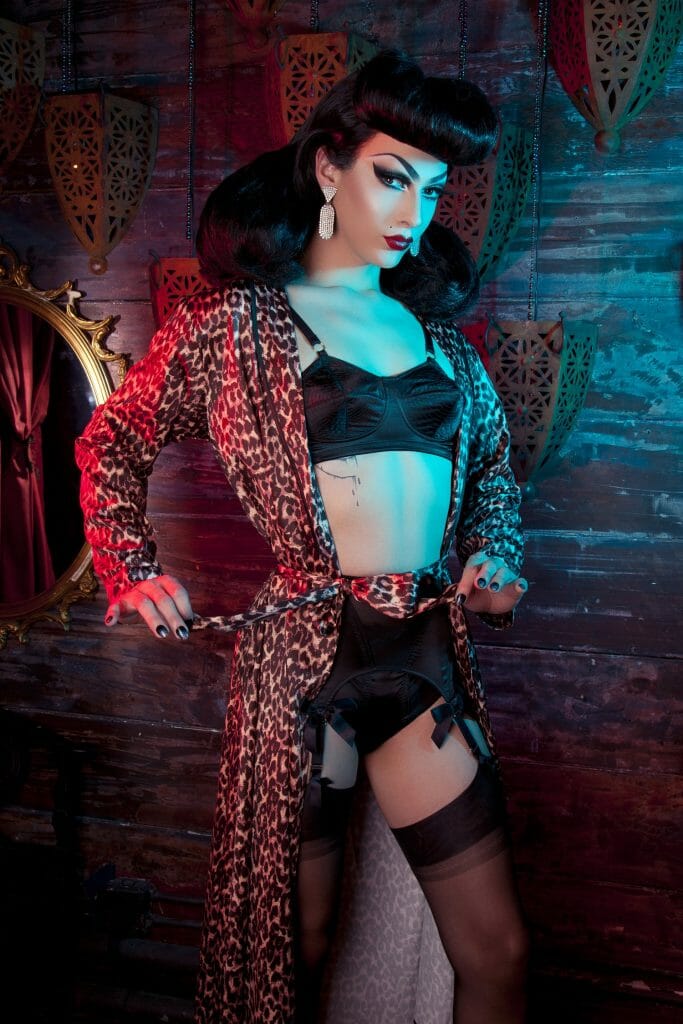 Playful Promises, one of the sex-work positive lingerie brands we spoke with, makes frequent references to pinup and burlesque in their promotional images. Via Playful Promises.

All the brands we spoke with on this issue were also clear that their main concern with SESTA/FOSTA was the human cost of driving sex workers off the Internet.

Harlow & Fox said that “everyone should be concerned about the effect on their free speech and ability to access the internet, but really...the key issue with SESTA/FOSTA is the ability to stay safe and actually alive is being taken away from an already marginalised group.” Playful Promises similarly said that “Our first concern is that SESTA/FOSTA strips safety away from sex workers, leading people to work in dangerous environments that makes it difficult to vet clients.”

But how does that relate to lingerie? Well, if we want to have a diverse and inclusive community, it’s important to support the rights of all members of that community. As Playful Promises says, “It’s important to us to demonstrate intersectional feminism, which is inclusive of sex workers. Not just because we have customers that are sex workers, but because we believe in women’s/femme’s rights regardless of their career.”

To have that kind of inclusive community, we have to support sex workers and oppose SESTA/FOSTA - for all our sakes.

SESTA’s Growing Threat to the Sex Worker Internet
How Congress Censored the Internet
Sex Trafficking vs. Sex Work: What You Need to Know
What the FOSTA/SESTA Anti-Sex Trafficking Bill Means