Disclosure: This bra was purchased for me to review by The Lingerie Addict. All opinions are my own. 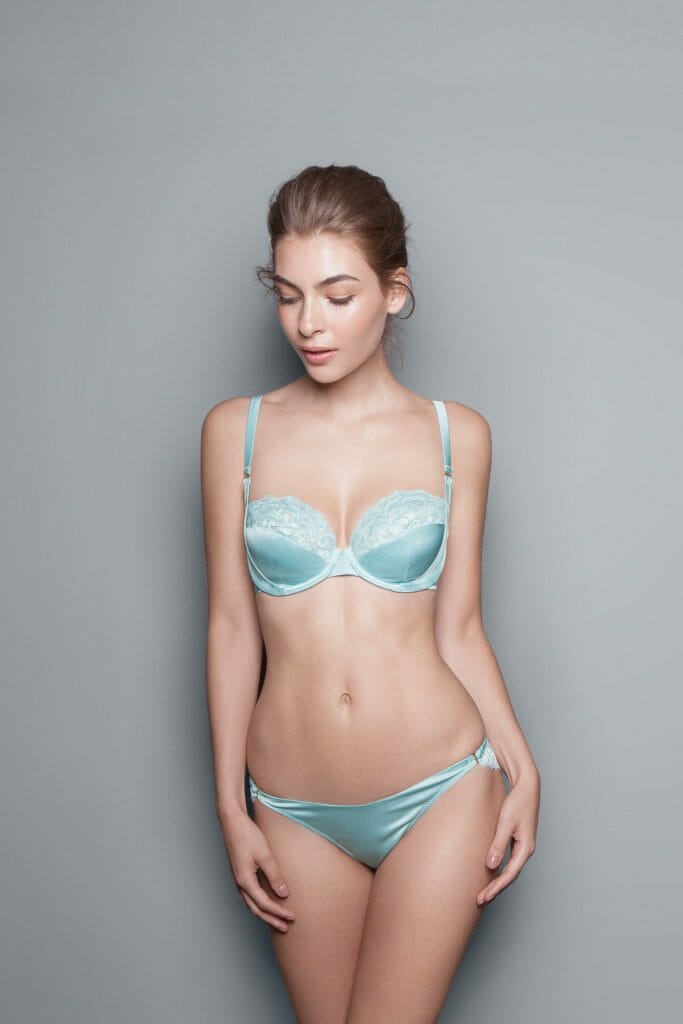 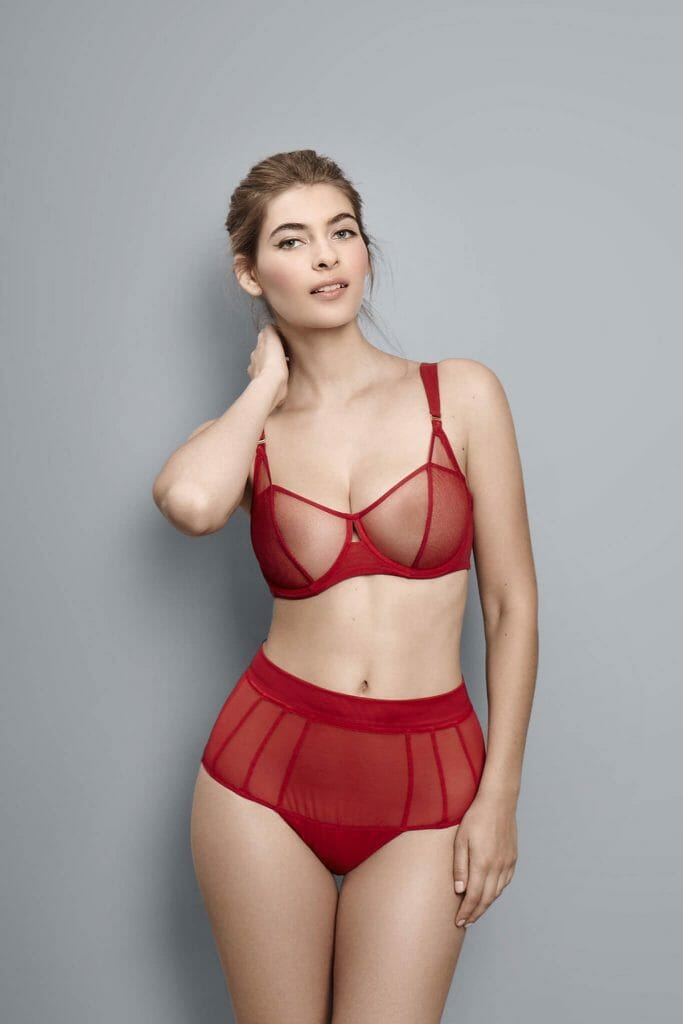 As a full-busted person who sister sizes into numerous luxury brands that aren't available my preferred size (Agent Provocateur! Chantal Thomass! Fifi Chachnil!), I’m intrigued by this line. The promise of a bra actually supporting me, while looking like something I could find at a core-sized, luxury boutique, is…well, it’s sort of the dream. 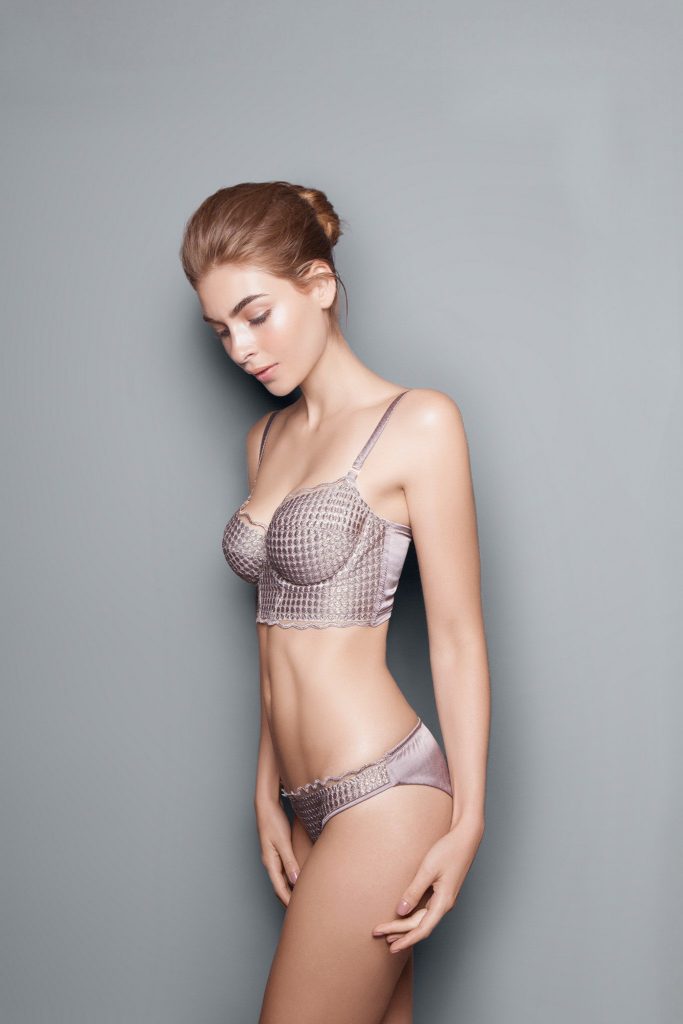 One of the major differences between core size bras and full bust bras is the strap width. This is frequently a point of contention for people with larger breasts who often want to wear bras just as delicate as those available in smaller cup sizes.

The truth is, bigger breasts typically require different components. However, Adina Reay's website and social media proclaim, "We promise that strap size stays the same no matter the size."

It’s certainly easier to make a supportive bra when you scale up notions like straps and hooks within a relatively narrow size range, like 30DD to 36G. However, I wonder if Adina Reay will grade their styles any further. Clearly, their bras must go through a lot of testing to ensure they give the fit many full bust customers want, while still looking practically as light as a C cup bra. 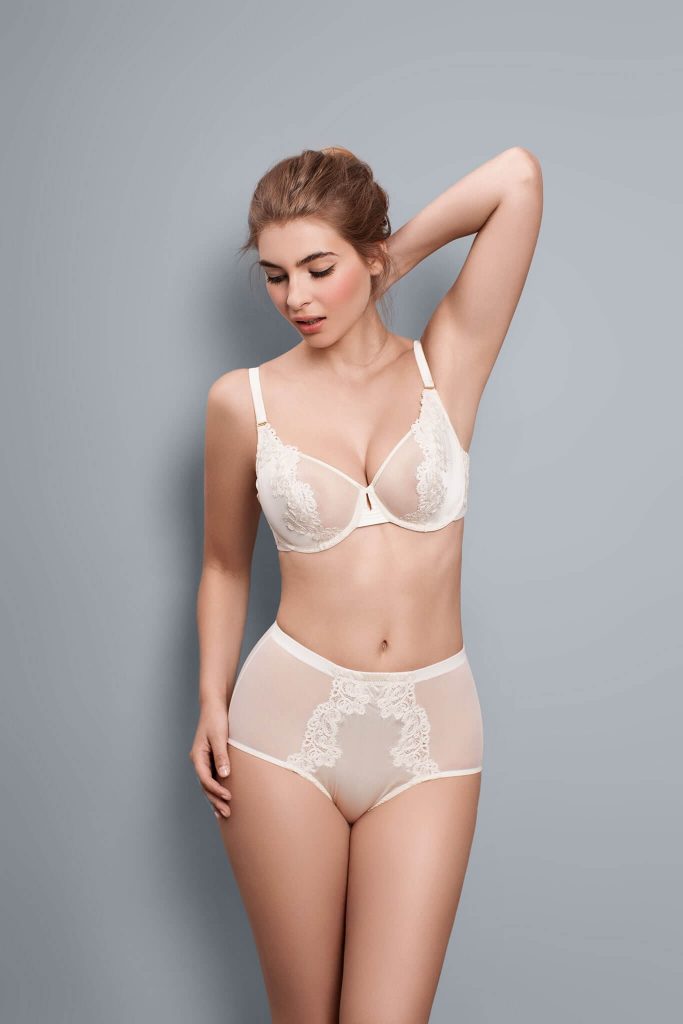 Adina Reay styles tend to be delicate and modern, yet utilize traditional lingerie details like fine lace and guipure embroidery. Their aesthetic is refreshing, a gentle departure from many full cup brands who often rely on old-fashioned femininity and the ease of putting bigger components on bigger bras. Many of their styles also utilize as few seams as possible adding to the “smaller bra look.”

But are they just as supportive as more traditional full bust bras? 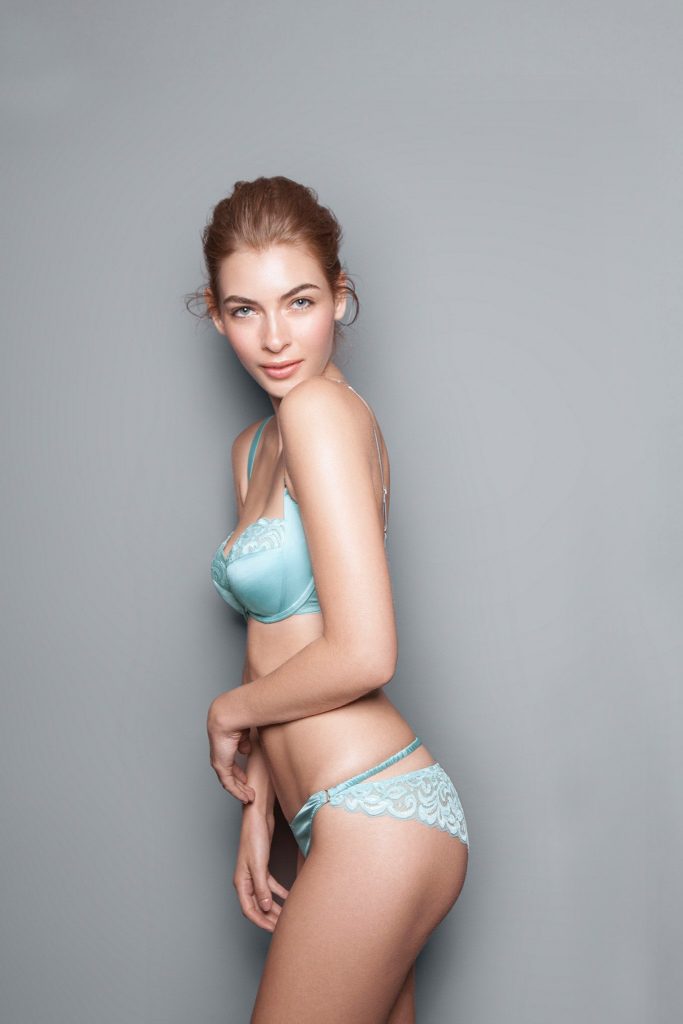 The Pru bra is probably the Adina Reay style that looks most like a “full bust bra,” with its slightly-padded, 4-part cup, visible sling, and U-shaped back. However, the straps look dainty, despite being nice and sturdy, and there isn’t any extra topstitching for support.

The Bra: Fabric and Stitching

From vivid mustards to rich forest greens, Adina Reay does color in an excellent, yet slightly unexpected, way for a luxury DD+ line. But the Pru’s stretch silk and color-matched lace are especially breathtaking in this particular Duck Egg shade, bringing to mind 17th century ball gowns, freshwater mermaids, and pale aquamarine gemstones. With its frankly impeccable sewing and luxurious materials, I sort of feel like a gemstone myself when I wear this bra. What more could you want? 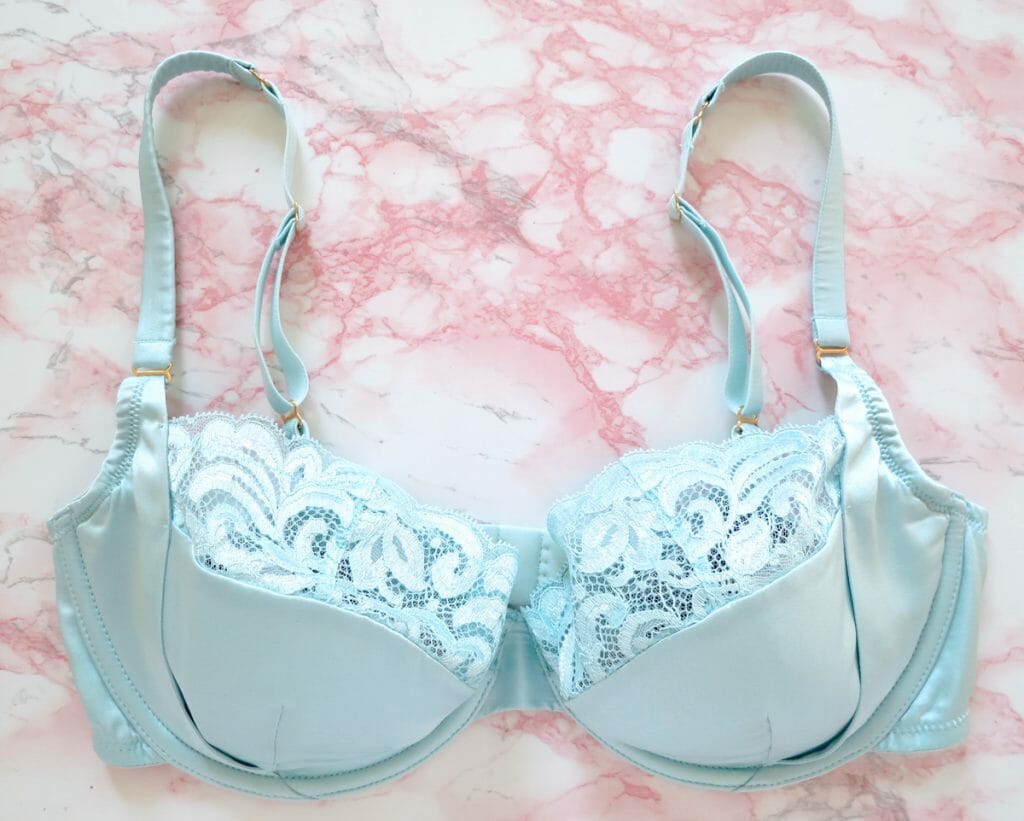 Speaking of that impeccable sewing, this bra has some interesting, unusual construction details. At the top of the cup, the mesh lining is stitched to the lace without any elastic, which secures the two layers, while possibly “cutting in” less.

The center gore is only lightly interfaced, making the bra feel more delicate, but also less sturdy. Finally, the visible side sling is daintily tacked to the apex of the cup, keeping it in place and adding to the luxe vibe of the whole garment. 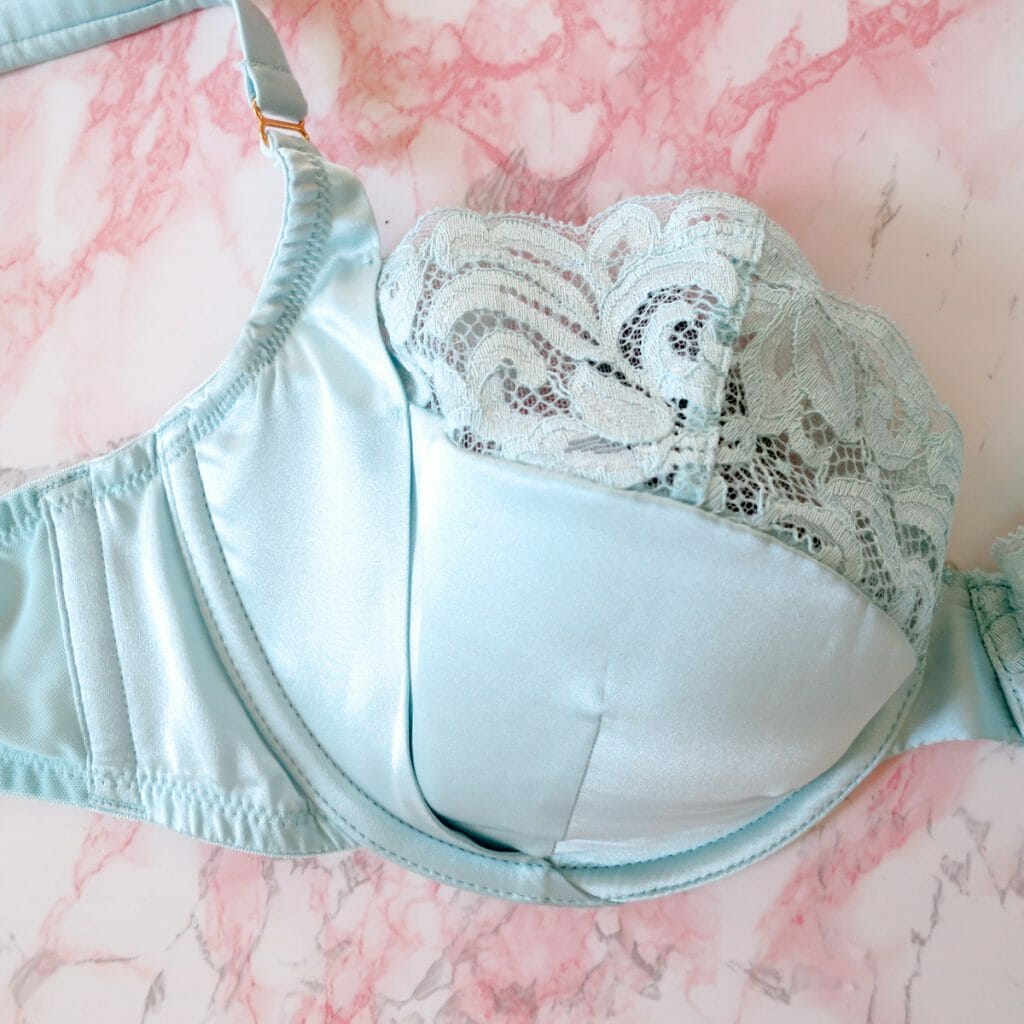 But my favorite detail is how the outer bottom cup has a tiny dart instead of another seam. Inside, the bra technically features a 4-part cup, but on the outer shell, the seam is replaced with a dart, perhaps to give an illusion of a less complicated bra. I’m totally in love with this unusual detail. Not only does it remind me of a nicely tailored gown, but it's also a good example of a full cup bra designer breaking out of the norm in a way that doesn’t compromise fit.

Adina Reay’s website isn’t super informative, but their shipping is free (!) and apparently expedited (!) from the UK on orders over 50£. That means I received my bra in under 48 hours from the time I ordered it - a delightful shock! It arrived in a nice logo-bedecked box without a receipt, perfectly ready for gifting. With the packaging and super-speedy delivery, I felt like I had picked up my bra at a boutique around the corner.

Fluctuating between a 34E and a 32F in UK sizes, I’m on the smaller side of “full bust” and consider myself pretty easy to fit, with 90 percent of my well-fitting bras falling into that size range.

But I wasn’t sure what size to order from Adina Reay, even based on past experiences. For instance, in the winter of 2016, I purchased their gorgeous sheer Fran bra, and it ran so big in the band and so small in the cup that I own a 30G. And I could still go down in the band and up in the cup. (For the record, I have never worn another bra with a 30 band!)

I mention the time frame because, based on friends’ experiences, Adina Reay seems to adjust their fit every season. The Fran bras made now fit differently than when the style was introduced.

I do think adjusting sizing is an overall good thing, since it means the company genuinely takes customer feedback into account and their fit gets better every season - all things that are super important for a new label! But it admittedly makes it a bit difficult to recommend sizes to people, or even purchase for yourself, since there’s little consistency in the fit.

Listed on the Adina Reay website, without a detailed description, the Pru bra appeared to have a stretch silk back band. After my snug experience with Harlow and Fox, I considered sizing up to a 34 band. But given my previous experience with Adina Reay, I took a gamble and went with a 32F. 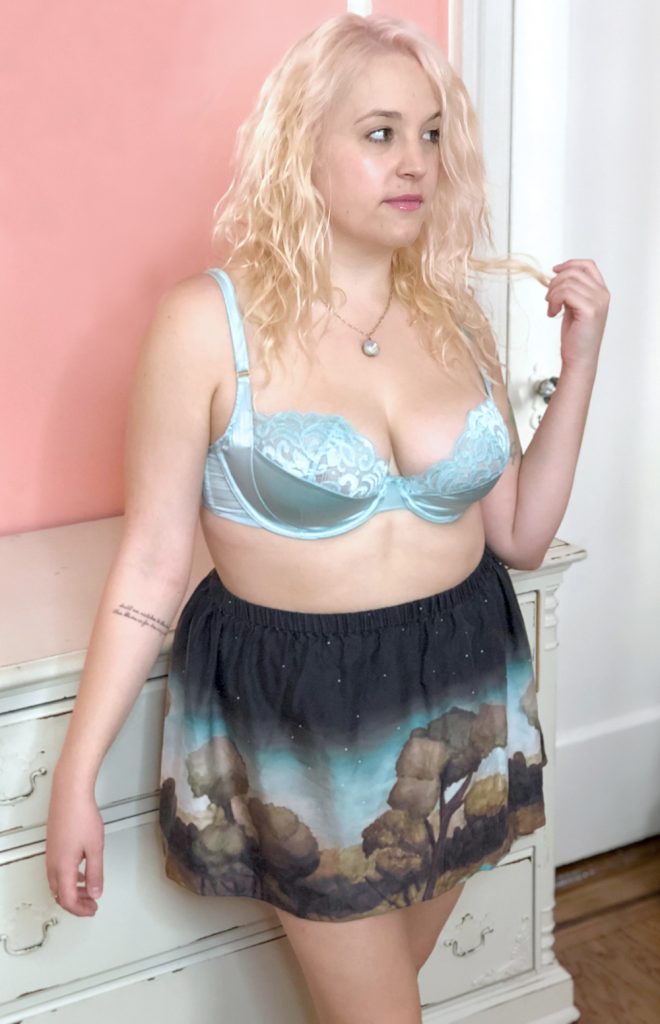 Skirt by she and reverie. Photo by Sweet Nothings NYC

That was a very good thing, because this band runs large, too. It’s actually made of power mesh in the back, and fits like I’d expect a 34 or even a 36 band to fit. (That means if you’re a 38 or 40 band, you might have good luck trying Adina Reay!)

As far as cups go, if you’re between sizes or full on top, I recommend sizing up. I’m fine with my normal size, but get a little bit of spillage depending on my hormone levels. The shape gives you that UK-style slight pointiness, which I like. It's worth noting, while it's quite similar in style to the Harlow and Fox bra I reviewed, the Pru gives a more upward-facing point I much prefer.

The thing I like least about this bra is how the back panel, where the hook-and-eyes live, is very stretchy. This adds another inch to the band width when worn, and makes it look like the bra is straining over your back, even when it’s way too big. I assume this was used because it was easily dyed-to-match, but I really wish it could be replaced with a less stretchy placket! 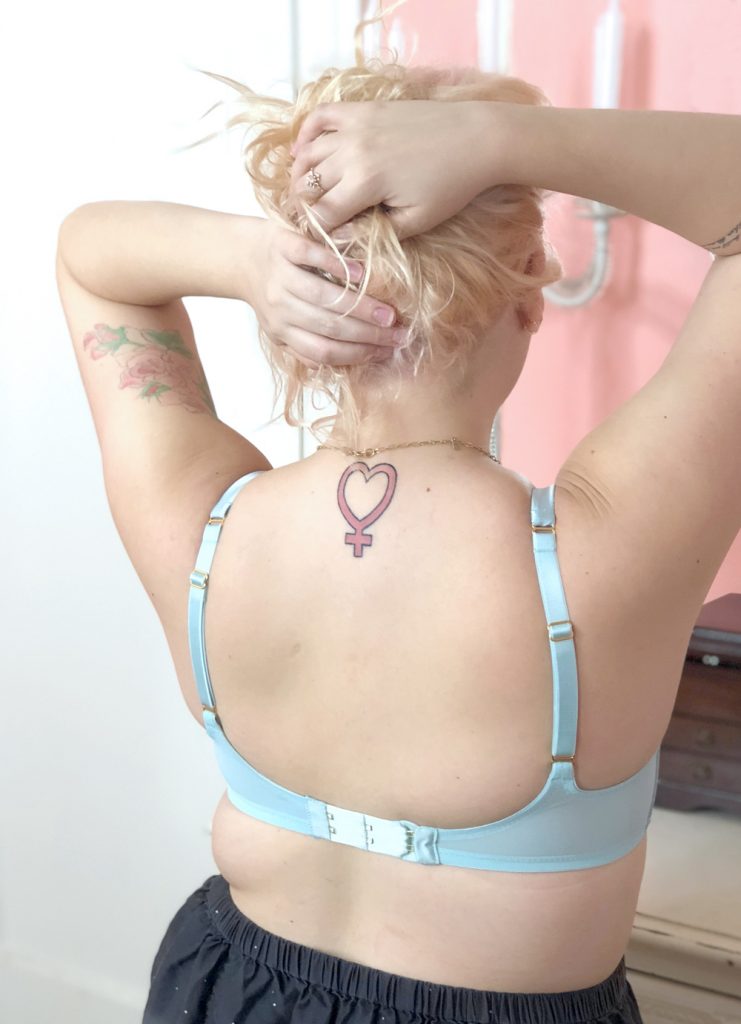 You can see how the hook panel appears to be straining against my back—but I would need to go down at least one band size for a good fit in this style. Photo by Sweet Nothings NYC

And the lift? Since so much of a bra’s lift comes from the snugness of its band, and given this band is quite big on me…well, it obviously doesn’t do much lifting. I think the construction of the cups means a smaller band would probably offer decent lift, although its soft, luxurious materials (including that slight pad) might not be as supportive for cups at the outer limits of their size range as, say, something with stiff mesh in the cups and gore. 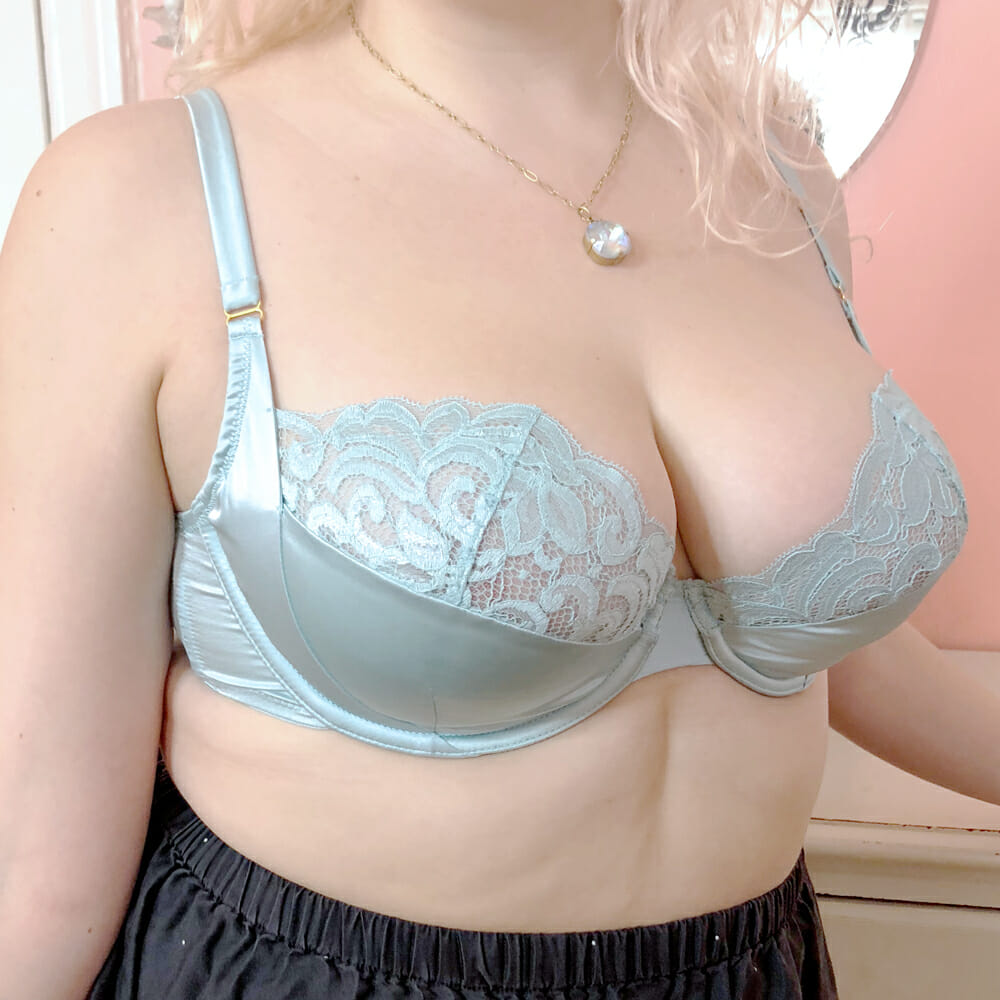 Overall, this is an absolutely gorgeous bra. I hope Adina Reay continues to perfect their fit in the future, because I think they’re one of the best-looking full bust brands, and are offering styles unlike anyone else.

With a snugger band, the Pru would easily be in my everyday rotation. But let’s be honest: it probably will be, anyway.