The Victoria & Albert museum is without a doubt my favourite place in London. I’ve been a member of this wonderful institution since I was a teen, and it’s incredibly easy to while away countless hours in its exquisite collections of Art and Design.  They’ve curated some stunningly beautiful exhibitions (the recent Alexander McQueen retrospective and Wedding Dress exhibition spring to mind immediately).

When The V&A first announced ‘Undressed: A Brief History Of Underwear’, it would be an understatement to say I was over the moon!  It goes without saying that I simply had to see the exhibition at the earliest possible opportunity. In the run up to the members’ preview day I was positively buzzing with excitement.  The exhibition is open until 12th March 2017 and tickets cost £12 (with concessions). 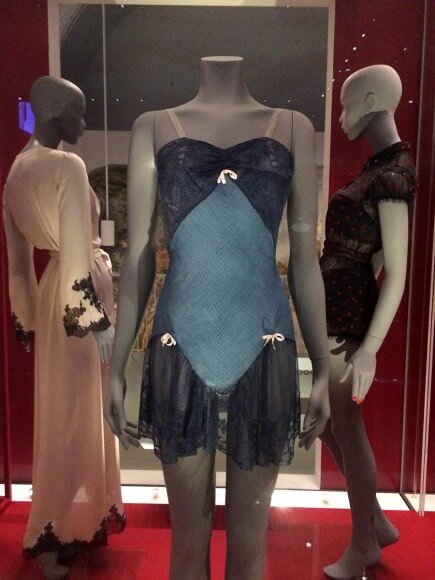 Slip, c. 1960. In the background: robe by Carine Gilson, romper by Fifi Chachnil. Taken at the Victoria and Albert Museum.

Upon leaving the exhibition, I felt distinctly conflicted and deflated. It’s taken me a couple of weeks to process my thoughts. Whilst I fully understand that the exhibition is aimed at a general audience rather than specifically lingerie obsessives, alongside the areas of beautiful objects and insightful commentary there are areas that I feel it fell a bit flat on.  I still highly recommend the exhibition to any lover of lingerie and fashion but that doesn’t save it from criticism!

Stays c. 1800. Taken at the Victoria and Albert museum.

The exhibition’s beautiful and extensive collection of corsetry is truly commendable. There’s a comprehensive view of shapewear development, ranging from 18th century hand stitched stays through to elasticated 1950s shapewear.  From exquisite embellishment (including hand quilting, flossing embroidery and stunning lace trims) there are also some quite wonderful examples of innovation: my personal favourite being the Victorian riding corset that was fully woven on a loom rather than being sewn, with removable bones and busk for easy washing. Another favourite piece is the 1851 pale blue silk corset created by Roxey Ann Caplin: the hip fin and button embellishment looks decidedly modern! 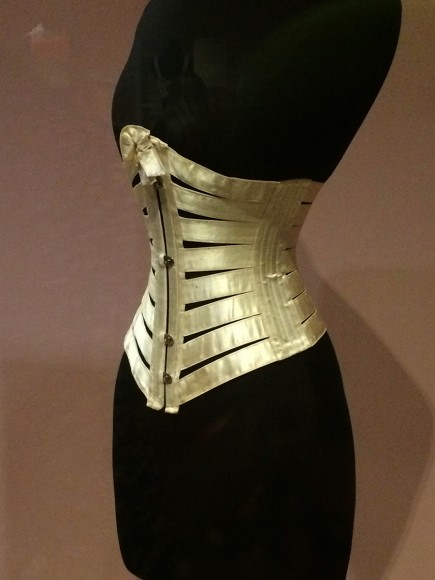 A ribbon corset, originally created as a 'healthier' and more 'breathable' option for foundationwear. Taken at the Victoria and Albert museum.

As beautiful as the corsets are, it was rather disappointing that the museum made no effort to try and displace tightlacing myths - if anything, it encouraged them. Despite the fact that numerous contemporary medical professionals have staying that tightlacing most likely did not cause permanent physical damage, the exhibition still included corseted x-rays without adequate context as well as labels discussing the concept of a ‘healthy’ corset.  Many fashion historians now agree that tightlacing was not a widespread practice, with much of the myth arriving from letters written to fetish fantasy magazines in the late 19th century and early 20th century (if anything, it was just another excuse to dictate how women should dress and control their bodies!).  Given the resurgence of corsetry in the modern day, it seems as though the curator missed a trick to explore some of these issues more thoroughly rather than courting controversy.

It was a pleasant surprise to see an entire cabinet dedicated to maternity underwear, an area that is so often neglected in fashion history. A highlight for me here was an early 19th century bust bodice that had been homemade with visible alterations. Such pieces give a wonderful insight into areas of women’s history that have so often been erased.

It therefore is a little disheartening to see the exhibition address this area of women’s bodies so well, yet totally neglect another that is much more common: that of menstruation. The exhibition has an entire section of it dedicated to exploring ‘hygiene’, yet there is zero mention of this bodily function despite the major significance it holds in the world of intimates. There is so much scope to explore technological advancements and changes in styles, from 20th century sanitary belts to the smart fabric of knicker designers Dear Kate and Thinx. It seems this is one area that will long be considered too taboo to discuss in a public arena.

Although there is a definite focus on women’s fashion, it was pleasing to see a considered representation of men’s underwear (totaling around a fifth of the entire exhibition).  Earlier historical objects were of particular interest, such as the early 19th century men’s ‘training belt’ (a type of corset that was commonly worn) and the elaborate 1750s hand-knitted silk stockings that came with the disclosure that it’s difficult to differentiate between genders in these items as the styles were so similar. 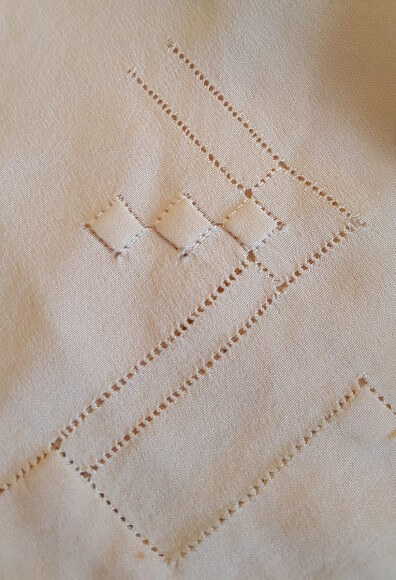 An example of drawn thread work, taken from the vintage lingerie collection of Karolina Laskowska.

I positively swooned at some of the examples of craftsmanship in the objects from the first half of the 20th century. I would argue that this is the exhibition’s greatest strength: there are so many pieces of absolute exquisite beauty with incomparable techniques and attention to detail.  The 1930s camisoles and knickers utilise the most stunning laces and time-consuming embellishment, from appliqué to delicate drawn thread work. 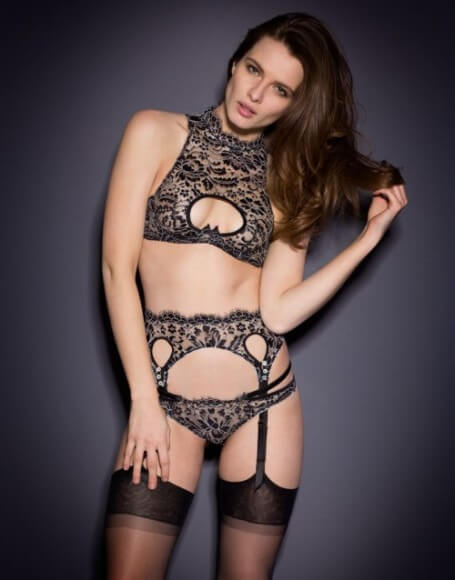 The 'Tamila' set by Agent Provocateur is part of the exhibition.

The contrast between these pieces and the exhibition’s selection of modern lingerie is therefore quite stark. Modern lingerie and outerwear makes up the last section of the exhibition and it feels like somewhat of an anti-climax. Although pretty, the designs selected by brands such as Cadolle, Bordelle, Fifi Chachnil and Agent Provocateur feel mass-produced and without any dramatic significance.

Part of this is down to the way they are presented. With Cadolle’s ‘Porno-chic’ quarter cup bra, for example, I would have liked to see some exploration of the historical significance of the quarter cup style: it’s by no means a modern invention, yet erotic-wear of the early 20th century isn’t even mentioned or displayed in the entirety of the exhibition. It feels as though these were designers that were selected for ‘prestige’ rather than historical significance.

As a whole, modern lingerie feels poorly represented.  Exploration into technological advancements feels a little cursory. There is some discussion on the push up bra and modern shapewear such as waist cinchers, but there is such a missed opportunity to cover the history and development of bra wires, foam cup moulding, use of silicone, developments of polymer wires and 3D printing. Technology aside, representation of significant lingerie brands is poor. The inclusion of lingerie behemoth Agent Provocateur is one of the few of note (and, in all honesty, unsurprising given its sponsorship of the exhibition). Although I am not personally a fan of Victoria’s Secret, there is no arguing the fact that they have changed the world’s lingerie landscape immeasurably. I did not see the brand even mentioned in the exhibition. Even British label Marks & Spencer was only referenced in a historical context. 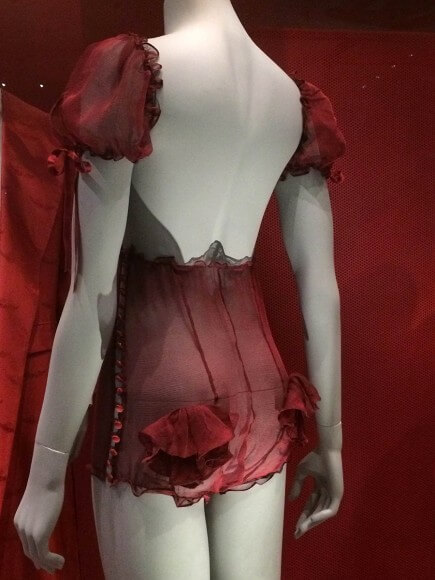 Ensemble by Strumpet & Pink. Taken at the Victoria and Albert Museum.

However, the inclusion of a few modern labels certainly brought a smile to my face. It was lovely to not only see multiple pieces of my personal favourite designer Carine Gilson, but also a short film showing the creation process of one of her slips.  Such footage is invaluable in its demonstration of the craftsmanship and human labour behind lingerie.  Other highlights included a set by independent latexwear label House of Harlot (a lovely contrast to the surrounding lace and silk!) and knickers from the now-defunct avant-garde design duo Strumpet & Pink.  These pieces in particular I feel are excellent examples of contemporary boundary-pushing design and being able to study them in person certainly left their mark. 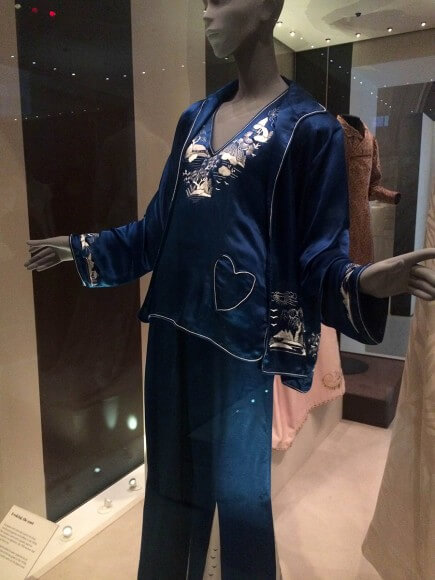 Embroidered silk pyjamas, Chinese made for the European market. C. 1926-1930. Taken at the Victoria and Albert Museum.

Although I am aware that the exhibition faced space and budget restrictions (as any exhibition does), it is disappointing that it’s presented as a ‘History Of Underwear’ when it’s realistically solely European and North American history. There is no mention of underwear from other cultures whatsoever or even acknowledgement of varying practices. Short of a brief note that the majority of exhibits were made, designed and worn in the aforementioned geographical areas, there is an overwhelming feeling that this is presented as the only underwear that ‘matters’. This is problematic in the entirety of the fashion world.  I would personally love to see the history of underwear outside of the Western World; certainly, it’s of more interest to me than contemporary outerwear with sometimes tenuous links to lingerie (to which an entire section of the exhibition is dedicated!). 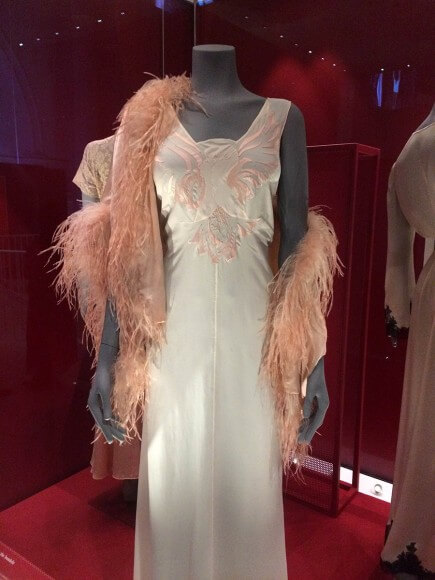 Nightdress c. 1930. Taken at the Victoria and Albert Museum.

I know that I’ll being making several trips back to ‘Undressed’ in the coming year, particularly to dedicate some more extensive study to the 1930s lingerie and 1800s corsetry. I would recommend the exhibition to any self-professed lingerie lover: just remember to keep an open and critical mind. As far as underwear history goes, this is quite literally a brief representation.  Should the exhibition return in years to come I hope that future curators consider expanding and making the collections a little more representative.

Readers: Have you seen the exhibition or are you planning on making a trip? Do you think that these are justified criticisms?