Disclosure: I received these items free of charge for review purposes. All opinions are my own.

Today's review features a slightly unusual product. Rather than being a garment such as a bra or panty from a lingerie line, it's what you might consider a lingerie accessory/gadget. Rixie Clip is the sort of thing that, at first glance, seems a bit "As Seen on TV," but I found it to be much more useful than the average SkyMall offerings. This doodad affixes to your bra band and allows you to adjust the size, either extending or tightening. I was sent two Rixie Clip 3 packs: 2 Hook with 3/4" spacing and 2 hook with 1/2" spacing. Both packs feature "nude," white, and black Rixie Clips. Each Rixie Clip has two rows of hooks. 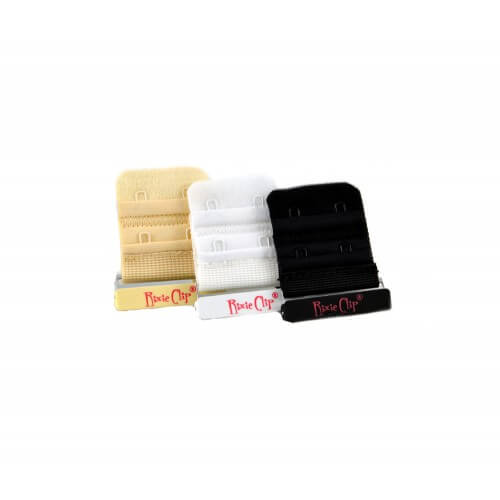 Why use Rixie Clip?
Rixie Clip could be used to prolong the life of an existing bra with a stretched out band, help bridge the gap if you are in-between sizes, or fudge the band on a sister-sized bra in your collection, and so forth. I've seen bra extenders before but this is the first product I've heard of that functions as a bra band tightener. The fact that it does both makes it even better. As a 30D, I am on the small end of general sizing, especially in the band. I often end up buying 32C bras because they are more readily available. My weight has fluctuated a bit over the years while my cup size seems to have increased slowly but steadily. So it's not surprising that I have a range of various bra sizes that range from "totally fit," to "mostly fit," to "doesn't fit at all, why do I still have this?" (Yeah, I should really organize my lingerie collection...)

How to use the Rixie Clip bra band tightener/extender

Putting Rixie Clip to the test
I tried Rixie Clip as both an extender and tightener. First I grabbed one of my old H&M bras: a 32C that I've always liked but has seen better days. I stared at the illustration on the back of the Rixie Clip packaging in mild confusion for a minute, then just used my own sense of logic and spacial logistics to affix a black two-hook, 1/2" Rixie Clip into position. Success! I wore the bra all day with the band comfortably snug, and realized I had outgrown the cups. Womp womp.

The next day, I decided to try it on a Made by Niki bra that I think fits very well, though the band tends to cause a slight dimpling on my rib cage. I placed the so-called "nude" Rixie Clip such that it would give me an extra hook's worth of breathing room. It gave me the perfect amount of ease for the band to lay flush against my sides without cutting in so fiercely. 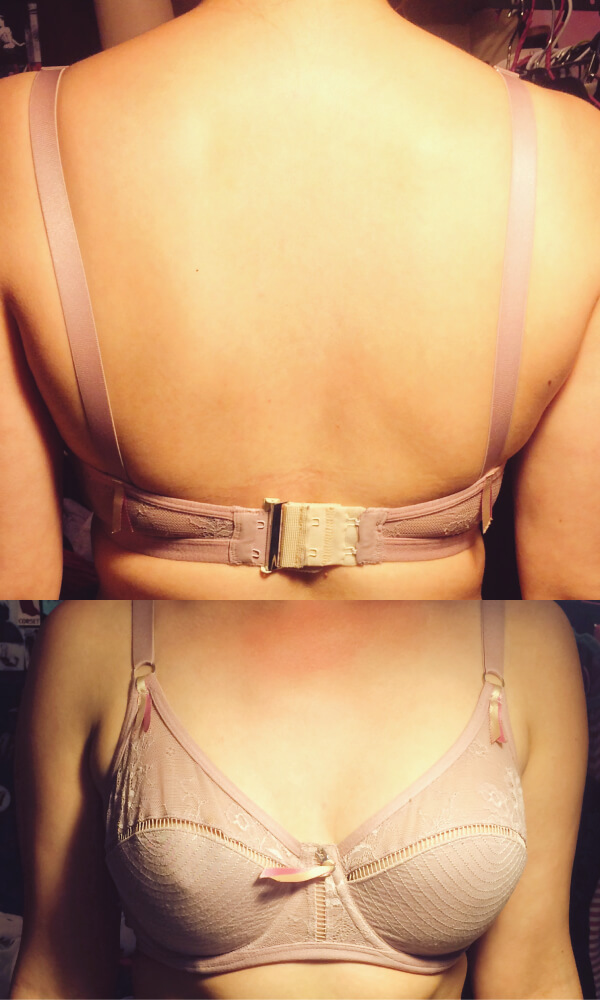 The bra in question is a pale, dusty pink, and I am definitely fair-skinned. The "nude" colored Rixie Clip is a pale beige which is lighter than both my fair skin and my muted-toned bra. Aside from the long-running issue that is the color name "nude," the major disparity in color value (relative lightness/darkness) is a bit jarring. This could make it harder to wear under light colored or see-through tops, and definitely detracts from the visual appeal of a great lingerie piece. Personally, I find that a soft mocha color is often the most versatile for blending neutrals and across a range of skin tones. The use of this particular unattractive, conspicuous shade of beige was my one disappointment with the product. That said, there are plenty of bras (especially at the budget price point) that are a similar unnatural "nude" with which it will probably match quite well. 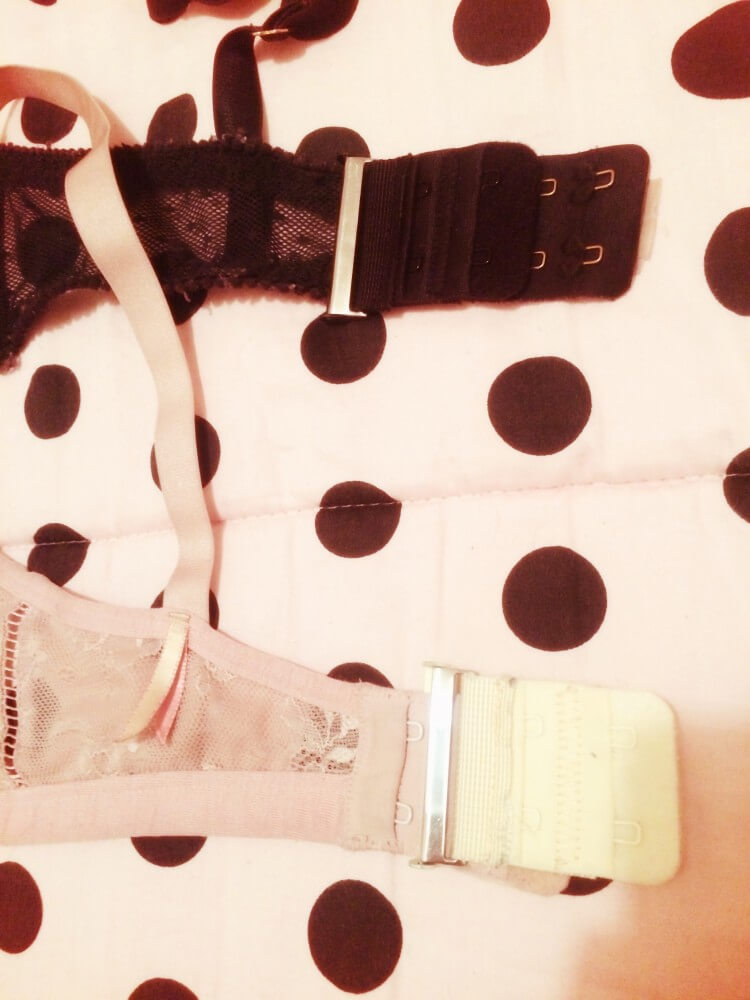 As a final test, I tried the black two-hook, 3/4" Rixie Clip on my fiancé's old Stella McCartney bra. It's fallen out of her favor since the band stretched out. The metal teeth faintly snagged on the worn out mesh of the band as I positioned it, which I admit had been a concern. I wouldn't necessarily recommend Rixie Clip for your more delicate pieces for that reason. Still, after I left for the day, my partner texted me to say, "This bra thing works very well," although it did nothing to solve the parallel issue of stretched out shoulder straps on the same bra.

Comparing sizes
Perhaps it's because I'm at the small end of the bra size spectrum, but I found the overwhelming majority of my bras had two hooks spaced 1/2" apart. I had a couple that had 3/4 spacing, and I knew my fiancé's old Stella McCartney bra fit this spacing as well. Rixie Clip was nice enough to send me a three-pack of both sizes, but they said that the most popular size is actually three hooks, 3/4" spacing. The hardware for both of the sizes I tried is the same, so the narrower extender has extra room to slide around on. Given the variety of band shapes out there, it kind of makes sense to have that extra width, even if it looks a bit odd. Rixie Clip also included an insert that gives tips on how to make it work with various band sizes and shapes. 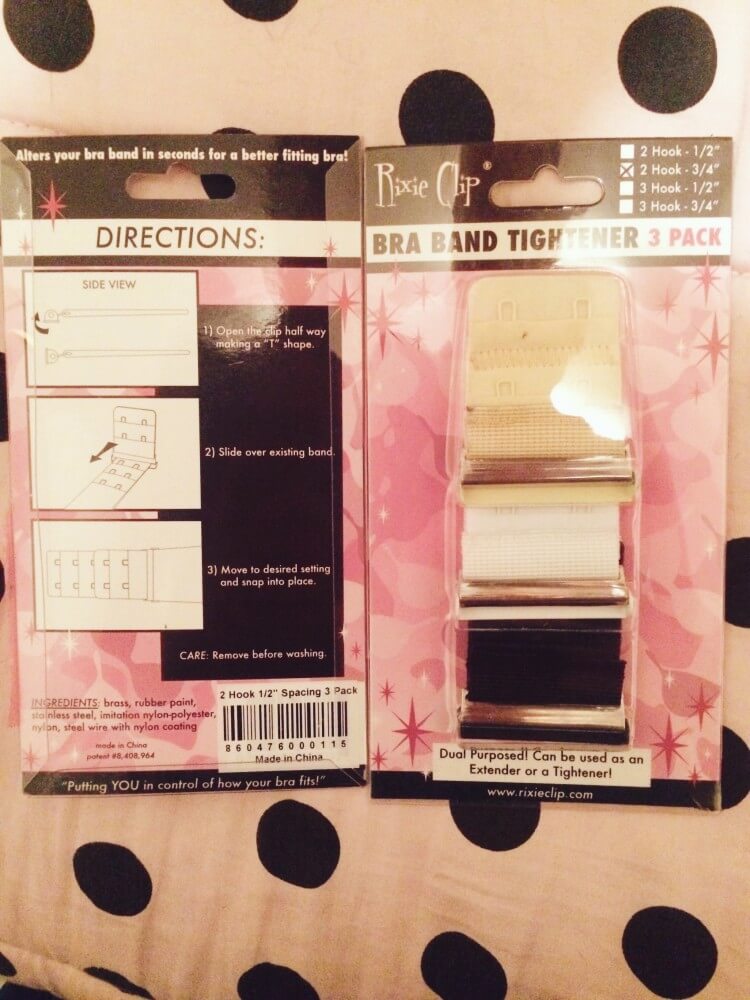 Front and back view of Rixie Clip packaging

Packaging
The Rixie Clip comes in simple "clamshell" plastic packaging, with a slide out cardboard insert in back. The packaging details the directions for use, including care ("Remove before washing [bra]"), and the "ingredients." This packaging is pretty much ideal; it's effortless to open and can be used to store the Rixie Clip between uses.

Quality, Price, Conclusion
A single Rixie Clip is only $7.95, and the three packs are $19.95. I would consider that "affordable" at just about any budget. Unlike most gimmicky gadgets, Rixie Clip really does what it sets out to do. It's a simple user-friendly product that can really help extend the wearing life of new bras. Especially if you are on a budget and can't afford new bras when your old ones stretch out, I would consider Rixie Clip a good buy. Likewise if you are prone to buying sister-sized bras when they are on sale, but aren't so crafty when it comes to adjusting the band size for yourself, or if you have a generally hard-to-find band size. The construction looks and feels sturdy and fairly tidy, and the "ingredients" are printed right on each package. I'm really glad I got a chance to try Rixie Clip; I'd heard of it before and it didn't disappoint.