Disclosure: I was at one point in contact with the author/publisher about writing this volume myself. I purchased my own copy for review purposes. All opinions are my own.

Waist training with corsets and fajas/girdles has continued to gain momentum, and there's a new book out on the subject. Vanna B's self-published Waist Training 101 book is a substantial improvement on the last one I reviewed, but is it the handbook waist trainers have been looking for? 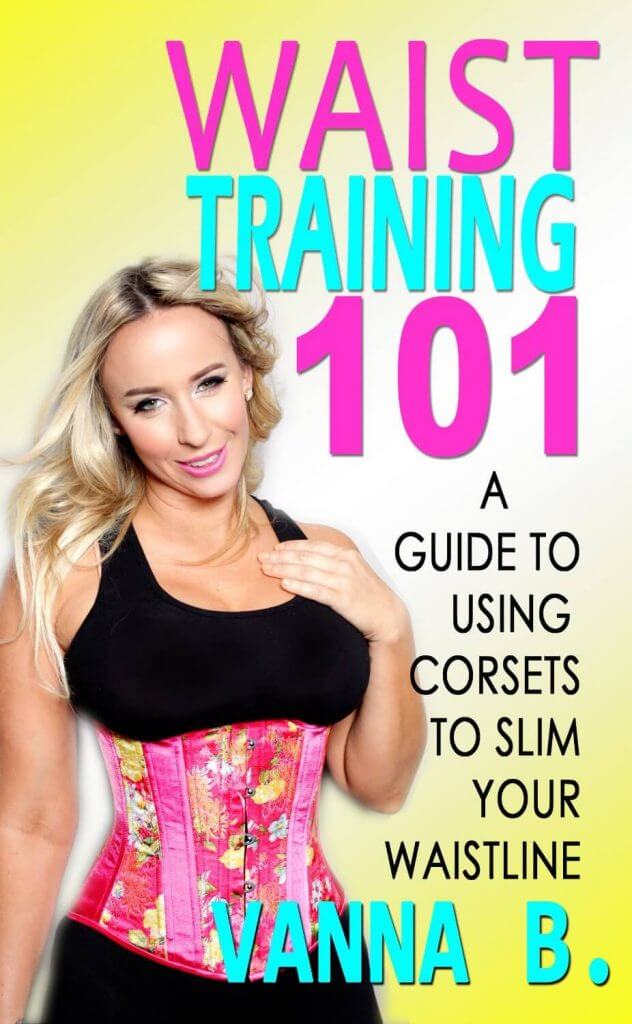 Waist Training 101 by Vanna B.

Let's start with the contents. What's actually covered in Waist Training 101? The contents include, of course, the expected: intro to waist training, beginning training, results. Also included is a fair amount of general information on corseting itself: history, corset components, types of corsets, health questions, and benefits, care and measuring. There are short chapters on diet and exercise, little "Did You Know?" facts sprinkled throughout the book, and a measurement tracker and waist training log at the end. The whole book can be read cover to cover in less than an hour.

The book has drawn some criticism; some feel that it's simply a compilation of information that's already available on the internet for free. Several who have written about corsets are uncomfortable about what seems to be some pretty close paraphrasing of their own statements, without any crediting or reference to them. This isn't to say that the book is entirely lacking in citations - just no referrals to any sources that could be construed as, say, competing. 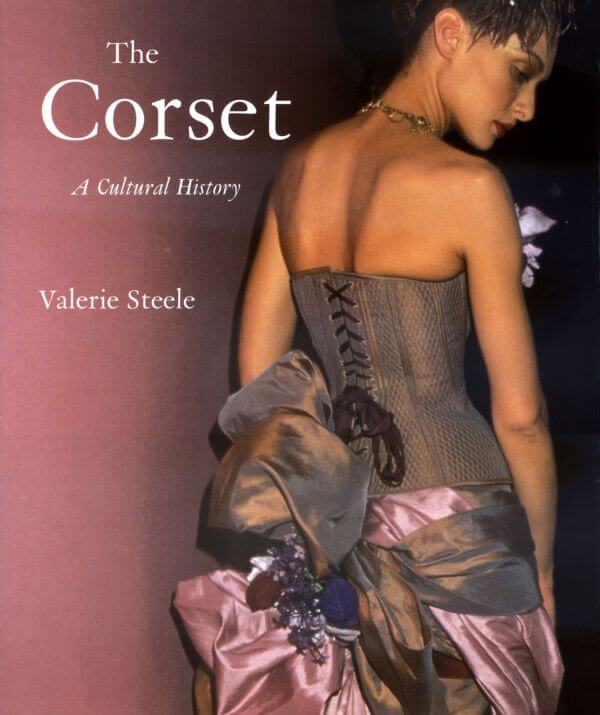 The Corset: A Cultural History, by Valerie Steele, is referenced repeatedly in Waist Training 101, particularly in the section on health.

As for the quality of information, it is more or less accurate. Frankly, there was (and is?) a need for this style of compilation. The last waist training book I reviewed is no longer available (presumably because its author had no rights to the images it used), so at present the only other actual waist training book available is Romantasy's price-prohibitive $50 guide.

I say "more or less" accurate because, generally speaking, I found Vanna's explanation of corset functionality to be quite shallow. It does feel like she's paraphrasing other sources without really understanding their meaning. On several occasions, Vanna will reference a certain system (of measuring, of lacing, of gauging quality, of breaking in a corset) as if it's unequivocally "the best" or only way. (Guys, I'm really tired about hearing how only "steel bones" are what make a corset effective as shapewear, and how corsets need at least 20 of them. Boning maintains vertical tension. The shape of the corset panels is what gives it, and you, shape. You could put steel bones in a pillowcase and it wouldn't magically become effective shapewear.)

The health section quotes Valerie Steele's, "The Corset: A Cultural History," extensively, distilling the relevant information into a bite size portion. The glossary at the end of the book seems redundant in such a short volume, and gives a combination of better and worse information than that within the meat of the content. 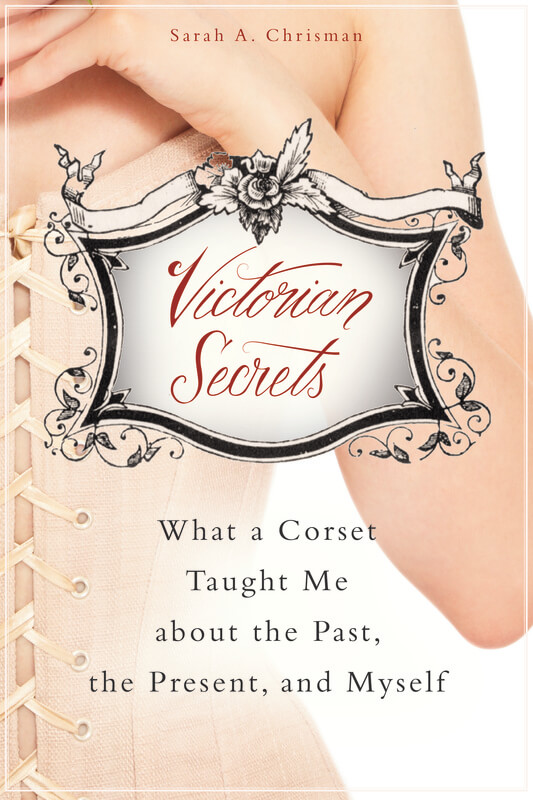 Victorian Secrets by Sarah A. Chrisman isn't technically a book on waist training, but it is a personal account from a woman who adopted the habit of wearing a corset, and eventually full Victorian dress, on a daily basis.

Given how short the book is, I wish Vanna had devoted less space to explaining construction and history that she doesn't "grok," and devoted more to telling us about her personal journey and actually wearing corsets. This was the rather effective approach taken by Sarah Chrisman's Victorian Secrets.

I would have liked to have read more anecdotal evidence - how long did Vanna train? What were her results? With which brands did she dabble? Has she had any custom corsets made? What difficulties did she find in adjusting to the corseted life? Vanna is now selling corsets via her Waist Training 101 website, but there's no information about the brand she's selling or how she chose it.

On the plus side, I thought the "Did You Know?" call-outs were a fun way to keep the reader interested. She maintains the most important maxim of wearing corsets: Listen to your body. I love that she included a measurement tracker and a waist training log. It's great that she's included a section on exercise, including pictures of how to actually do a couple exercises and stretches. (I do wish she had explained why she chose those particular moves... I'm really clueless when it comes to exercise.) 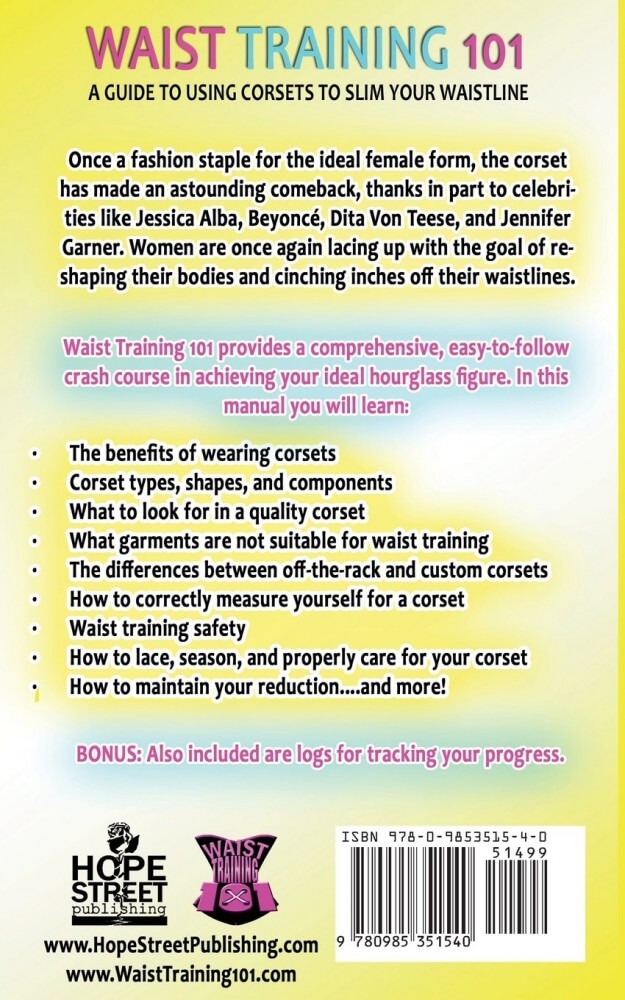 Waist Training 101 by Vanna B. Back cover.

Design-wise, I have to admit I was, well... less than enthralled with the aesthetic of the book. The neon cover is a bit garish and looks as if it were designed in PowerPoint. Corsetry to me is about elegance and refinement, attention to detail and old-fashioned craftsmanship. If I had my way, every book about corsets would be at least as nice as your average coffee table book.

The illustrations inside also leave a lot to be desired - they are inconsistent; some of them are clear copies of specific designer's works, others are crudely sketched and rendered. As a fashion illustrator, I don't think this particular approach to illustration actually serves the purpose of, well, illustrating the concepts. The print version also has some issues with tracking at the ends of paragraphs, where the justified align is maintained and thus the final words are spaced absurdly wide.

From the design to the content, it seems as if Vanna's book is directed specifically at the new, "mainstream" crop of corset wearers. It has the look of a diet book and indeed covers diet and exercise as an aid to waist training goals.

While of course I advocate for eating healthily and being active, many who waist train have no interest in (or need for) losing weight. The corset culture that I know and love is about self-love, about discipline, about increasing your understanding of and appreciation for your own body. The conclusion of the book talks about goals and maintenance as if waist training and corsets are just a means to an end, rather than a lifestyle change/subculture community.

At the end of the day, there is a kind of person who wants to spend $5-$15 to have all the information in one easily digestible source without having to trawl through the free internet sources. Though Waist Training 101 isn't the ideal book on the subject, it's unlikely to be the last. I give it three stars.