How to Use Lingerie for Your Cosplay | The Lingerie Addict

How to Use Lingerie for Your Cosplay

Since today is the first day of San Diego Comic-Con, I thought it'd be appropriate to publish a blog post on cosplay! Today's guest author is Alexis Dalbey, a university senior studying for her B.A. in English. In her spare time she enjoys keeping up to date on women’s and LGBTQIA+ issues, reading everything she can get her hands on, playing video games, studying cultural theory, and going out to bars for karaoke. Her favorite lingerie brand she’s purchased from is What Katie Did, but she dreams of being able to afford something from Bordelle or Agent Provocateur. You can follow her blog at TheDialogTree.tumblr.com, and she is launching a podcast with Guy Thomas soon at amateurexperthour.tumblr.com. You can see more of the photographer’s work at Tuesdays-dusk.com. 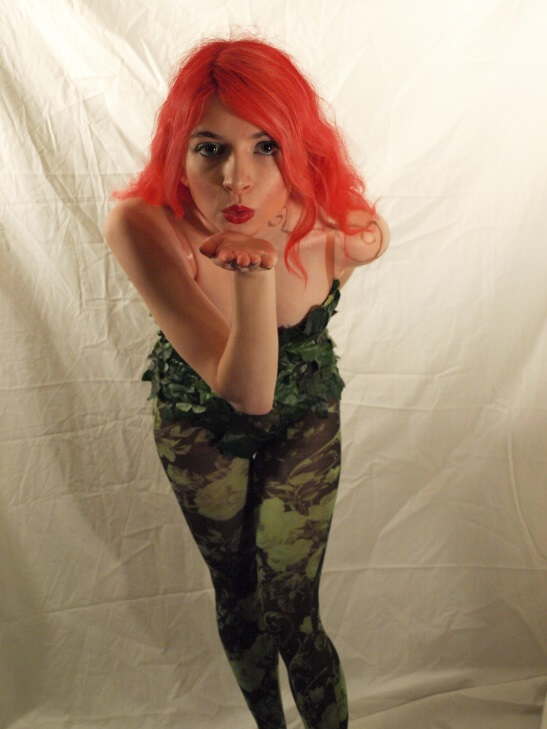 Last June, I set out on my first big cosplay project --- to dress up as Poison Ivy from Batman.

I've been buying lingerie for a few years, but I’d never done a large sewing project besides making shorts in Home Economics when I was thirteen. I really felt like I was going in blind, but I was determined. I started by ordering a small beige Bodywrap: Firm Control Convertible Bodysuit from Bare Necessities. 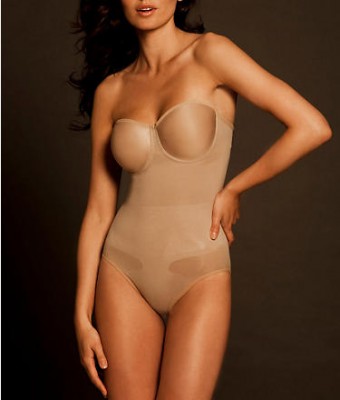 Regarding the lingerie, I am very pleased with the fit overall. Although I don’t feel much need for bodyshaping in general, I do enjoy it as a part of dressing up as drawn characters. The waist shaping features and padded rear definitely help me achieve the slightly exaggerated body shape of Poison Ivy. Another bonus is the clasps at the crotch, which you can adjust to three different sizes. That helps with feelings of tightness or pinching down there, and it makes getting in and out of the bodysuit much easier. Now for the negatives: I was somewhat dissatisfied with the cups, which were simply too big for me. I have to wear another bra underneath so it doesn’t look loose and awkward. It’s also very difficult to hook the straps in. It’s about a ten minute process, and even after all the struggle and sore fingers, I still can never get one of the straps properly hooked in the back. This always worries me when I wear it, though it only came unhooked once during my weekend at the Chicago Comic and Entertainment Expo.

I originally intended to go bare-legged, but I found that the bodysuit tends to ride up fairly quickly. I’m not comfortable showing that much of my body in a public place like a convention, so I purchased Twilight Printed Tights in Flo Green from Pamela Mann. They are perfect for the costume. Throughout the convention, I received the most questions about my tights. Many cosplayers have found themselves in a similar position of wanting just a little more coverage without sacrificing aesthetic, and Pamela Mann is a good option for that. But as I said to everyone who asked, the downside is that they come in only one size, and for me that resulted in the tights being pretty loose on my ankles. 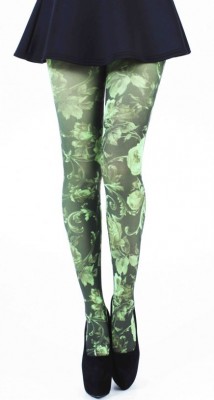 The process of turning a basic beige bodysuit into a Poison Ivy costume was long and hard. I spent nearly 200 hours dying the fabric dark green, cutting individual leaves from fake plants, and sewing them onto the bodysuit. I quickly learned that the biggest obstacle was the fabric: nylon and spandex. It was so stretchy that I couldn’t properly place the leaves and guarantee they would look right without wearing the bodysuit while I was sewing. I don’t do enough sewing to justify buying a mannequin, but I’m sure having one would have made things much simpler. Having to wear the bodysuit while I tried to sew made the process quite awkward at times and resulted in a lot of skin pricking and quiet cursing. 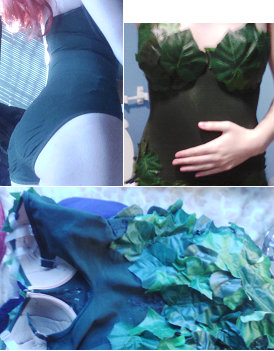 Phone pictures from creating the costume

After all that painstaking and time-consuming work, I’ve thought a lot about the methods I chose. Throughout this convention season, I’ve also been thinking about the role lingerie plays in cosplay, and of course beginning my costumes for the coming year. Here’s what I’ve learned from my experience as a lingerie and cosplay newbie. 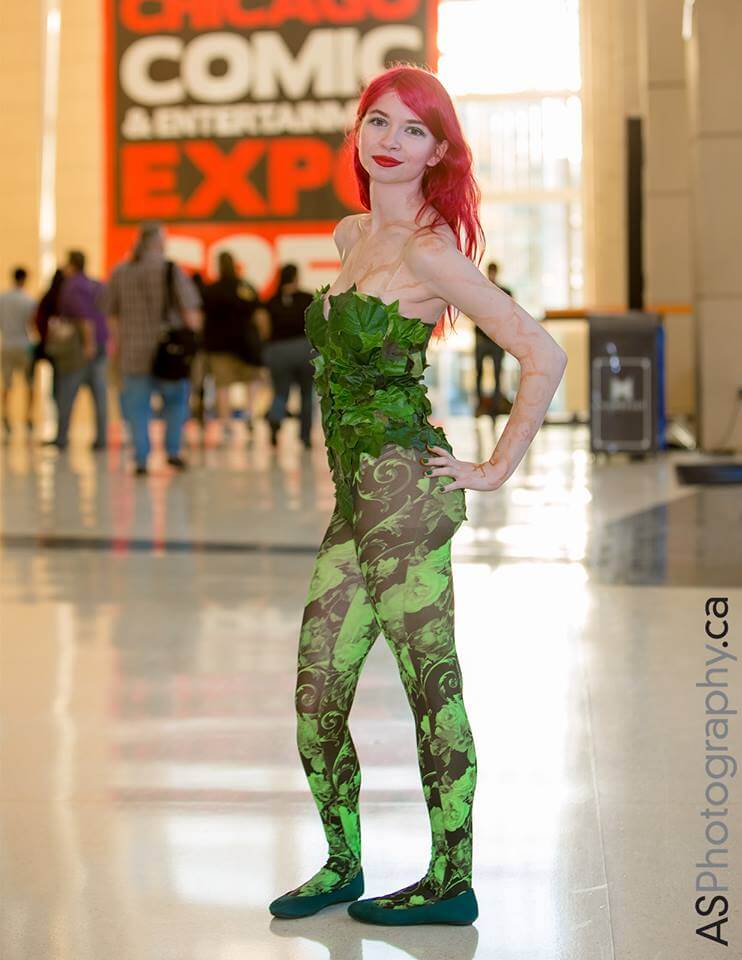 The author in her finished Poison Ivy Cosplay. Photo by Cosplayers Canada.

While the end-product of my costume looks great, a high quality piece of lingerie or shapewear may not be easy to alter. It’s already a finished product, and it’s not meant to be changed so drastically. You should consider how much change you plan on making to the piece, and what the material is. If you just need to dye it, pieces that are very delicate or very stretchy won’t be much of a problem (just be careful to use appropriate dye for the material). However, if you have to sew or glue a lot, you’re going to find it a challenging process. The more alterations you need to make, the more basic the base of your costume should be. You want as few obstacles as possible. 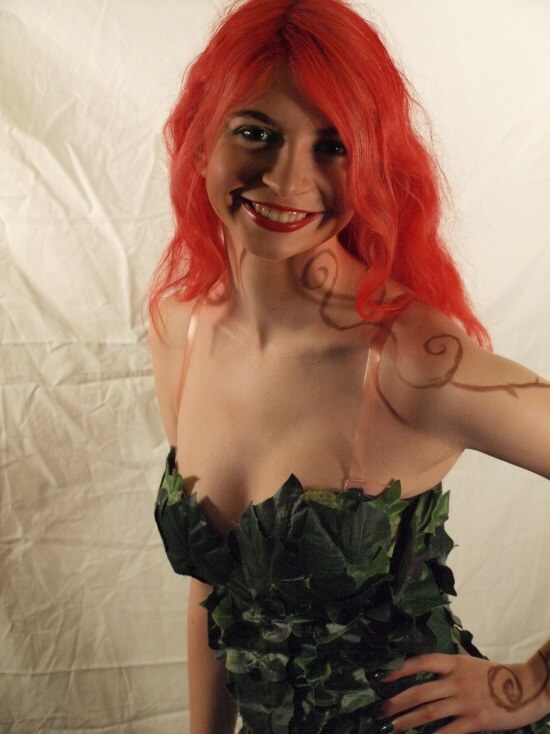 Many female fictional characters have lingerie as the baseis of their costume; you may not even need to alter anything to get the look you want. For example, Black Canary is usually depicted in what basically amounts to a bodysuit. One can easily purchase a bodysuit, some fishnets, a jacket and gloves, and have a finished cosplay with no further alterations needed. In this way, lingerie is incredibly useful for costuming. On the other hand, it’s important to remember that characters in video games and comic books have bodies that are not bound to the laws of physics. As much as you may want to cosplay the New 52 Harley Quinn, you have to recognize that her garments will not stay up on a real human being. Clear straps and fashion tape are your friends, or you can always change the costume in a way that will better fit your body. 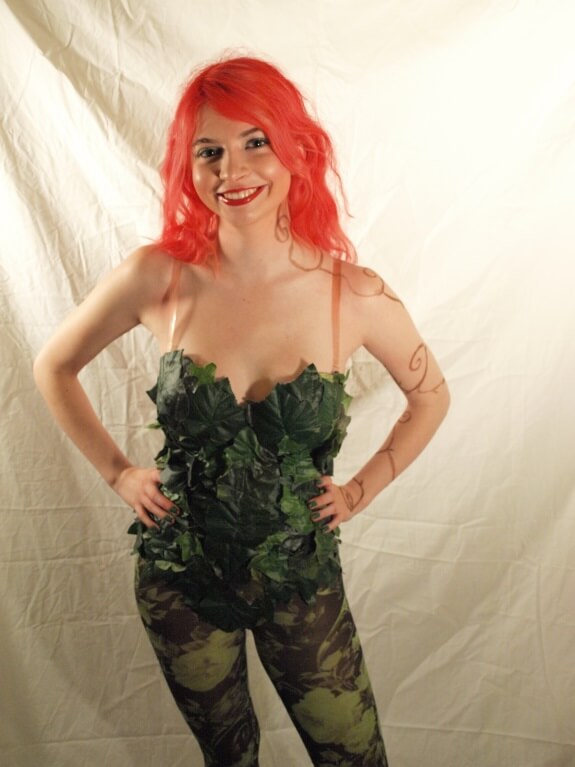 Finally, if you’re even a little concerned that your costume may be considered inappropriate, double-check the rules for appropriate attire for any conventions you are planning on attending. If the rules are unclear, contact the convention staff with your concerns. A good rule of thumb is that your costume should have at least as much coverage as a two piece swimsuit. Although your favorite character may not be considered pornographic because she has a strip of fabric over her nipples and an armored thong, there are conventions that won’t allow a person in dressed that way. It may seem unfair that they’re selling these characters to you, while not letting you dress as them. But keep in mind that many of these conventions are meant to be family-friendly, so they can’t let every M-rated character in (convention staffers might have a problem with this outfit for Ivy Valentine, for example). 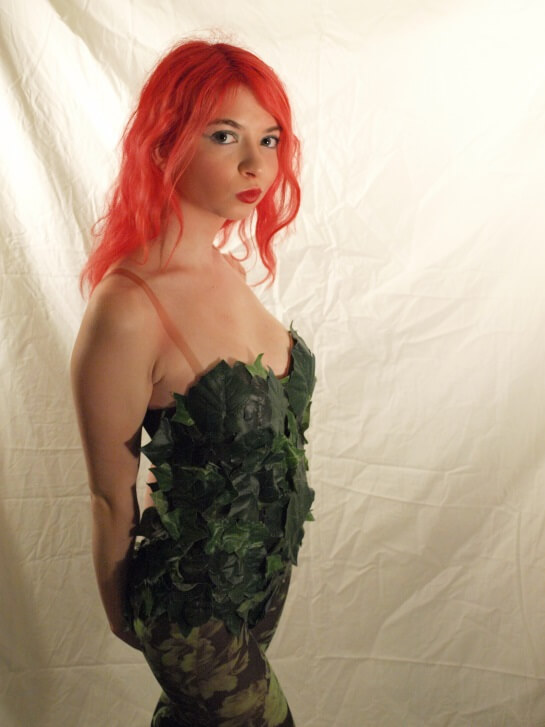 I wish I didn't have to bring it up, but it is an awful reality that some people use conventions to do terrible things. If you're wearing a sexy cosplay, there's a possibility that an awful person will bug you, or try to touch you, or take your picture without permission. This is not acceptable: cosplay does not equal consent. Although some conventions have rules in place that say buying a ticket means you are consenting to having your picture and video taken, I would debate this. Someone taking a panoramic shot of the convention, or you happening to be in the frame of a photo at a game developers booth is one thing. However, if you're bent over looking at Marvel Labbits, and you see someone standing a few feet away with their camera aimed specifically at your butt (true story), that is very different. If someone is harassing you or making you uncomfortable, you are completely justified in telling them to back off as loudly and forcefully as you need to. More and more conventions are putting comprehensive harassment policies in place. Cosplay is about self-expression and celebrating what we love, and you deserve to feel safe while you do it. If someone is acting inappropriately, find a convention staffer, and they will help you.

Of course, the most important rule of cosplay is to have fun! It may sound clichéd to say that, but it’s important to remember. You can make your cosplay whatever you want: gladiator Wonder Woman, steampunk Zelda, punk Storm, genderbent League of Legends characters, burlesque Princess Peach. Your cosplay is for you. You can take as many liberties and put in as much time or money as you want to get the maximum return on happiness for you.

I wish all of you luck in making your costumes and happy convention season!

Do any TLA readers cosplay? And if so, what are some of your favorite characters?