Disclosure: I purchased this set with my own money from Rue La La. Neither Rue La La nor Pleasure State requested a review. 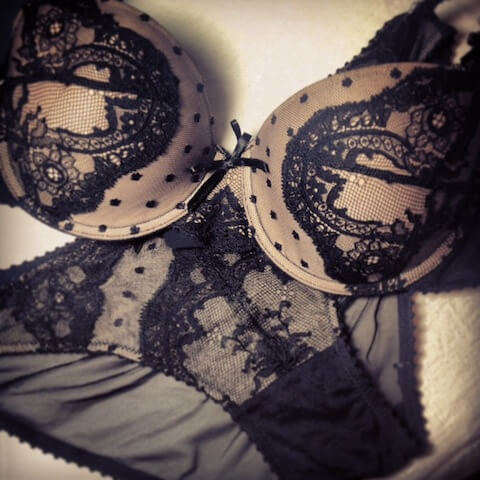 I've been wanting to try Pleasure State for awhile now, even since before I mentioned them on TLA. I like Pleasure State's use of lace, and they offer something a little bit different from what I usually see in lingerie stores while still being completely wearable. I chose the Heirloom Lace set because I thought that black lace overlay was completely gorgeous. I ordered the bra and knicker in my usual sizes: 34C and L. The bra is a contour (i.e. t-shirt) bra, and the knicker is a low-rise brief with a sheer back.

Pleasure State is owned by the Bendon Group, and if that name seems familiar to you, it's because the same group produces Elle Macpherson's and Stella McCartney's lingerie labels. I would say that if you're familiar with the fit of those two brands, then the fit of this one is very similar. On me, the Bendon Group's brands are a little small. The band for this bra fit snugger than I would like (which is a similar complaint I have about Elle Macpherson and Stella McCartney's bras) and the knicker, while pretty, did feel a little snug on my hips, especially on my rear. 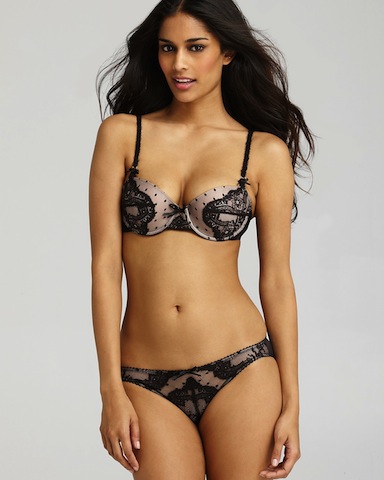 That said, the bra did fit very well and gave me an amazing profile, particularly under lower-cut or v-neck shirts. Though not billed as a push-up, it did give a bit of a push-up effect. Even better, the lace overlay, gorgeous as it is, is pretty much invisible under clothes. I also thought the ruffled tulle shoulder straps were a nice touch, especially if your bra straps peek out. Finally, this bra holds up to washing and repeated wear very well (and yes, I'm talking about my washing machine on delicates cycle).

While I liked this bra set, I'm not sure if I liked it enough to buy it at all full price. There's nothing wrong with either of the pieces; my review notes have more to do with personal taste than any real issues of fit and quality. I just wasn't bowled over. It's pretty... but in a drawer full of pretty bras, I'm not sure that's enough to stand out.

Have you tried Pleasure State before? What do you think of the brand? I'm definitely interested in getting some other impressions.