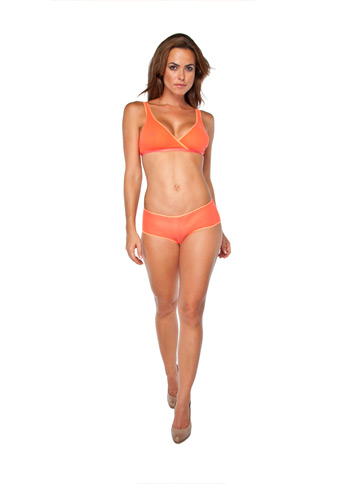 I've been Instagram stalking Cosabella for quite some time. Cosabella's signature style is chic and easy, with bright punchy colors styled onto elegantly simple feminine basics. Headquartered in Miami, it's easy to see the famous beachside city reflected in the playful color palette; made in Italy, you see the craftsmanship reflected in the clean lines and construction. So, having been aware of Cosabella for so long, I was very excited at the opportunity to review Cosabella, and was given my choice of a few sets. The "Soire" set (New Soft Bra and New Hotpants) were provided to me for review free of charge; all opinions are my own. 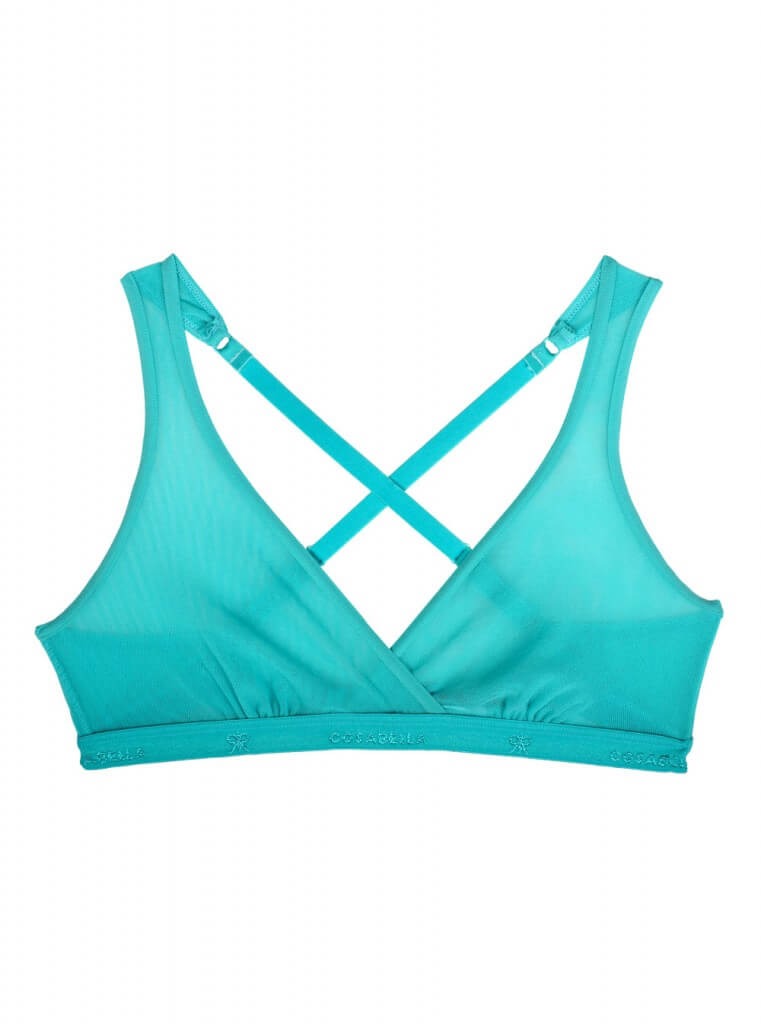 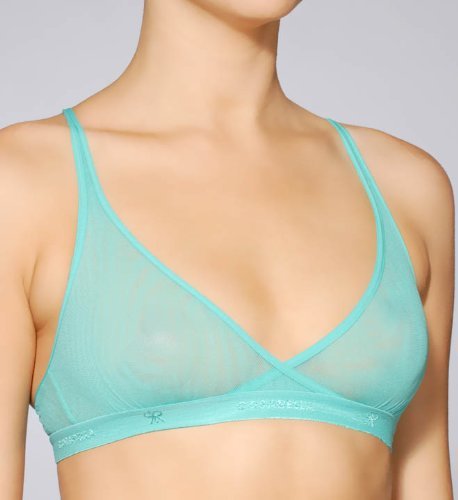 I am a big fan of bralettes. The racerback on the Soire New Soft Bra particularly interested me, as it offered a variation from the template bralette shape, but promised the comfort and lightness that have made me such a bralette proponent in the first place. Typically a 30C/size small top, I received a size small bra, in a vivid electric cobalt (see final image, below). Though I'm not normally much into blues, the hue sent was vivid enough to still be eye catching and feel fun. I almost immediately discovered that the racerback straps are actually convertible, adding versatility to the design. I also discovered that the elasticated band is very, very stretchy. I tried the straps both ways and still found that the band rode up both front and back (the band elastic is very soft and tends to collapse, folding in half on the bottom of my breasts). I had a feeling that the so-called "small" would fit my girlfriend, a 34DD/medium significantly better than it did me. Actually, it did --- the band still had a lot of give and the coverage wasn't the most modest, but it lay much better than on me. I would definitely recommend ordering at least one size smaller than you think you need to. There are a generous four sets of eyes for the bra hooks, at least, so you have a lot of flexibility to go up in the sizing. The construction is pretty clean throughout and the double layered mesh is very soft and lightweight as promised. Rather than seaming or darts, there are soft gathers at the bottom of each cup. Were it not for the sizing problem I would probably love to wear this bra on a regular basis, but luckily it will find a good home in my girlfriend's bra drawer. 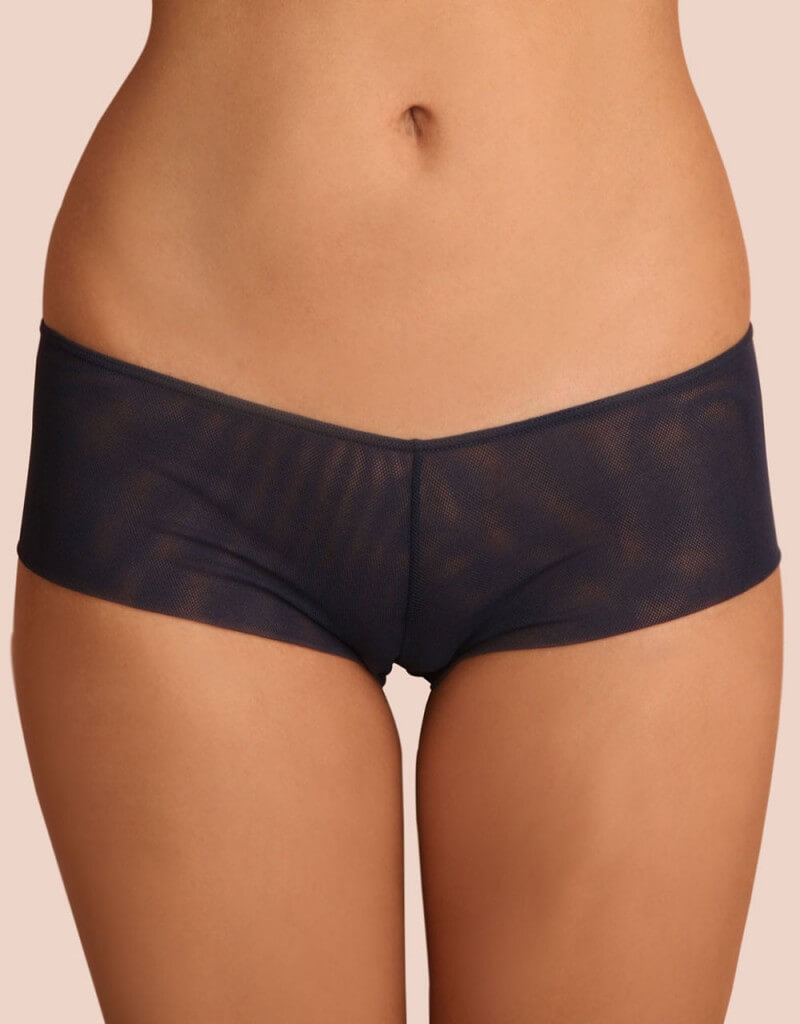 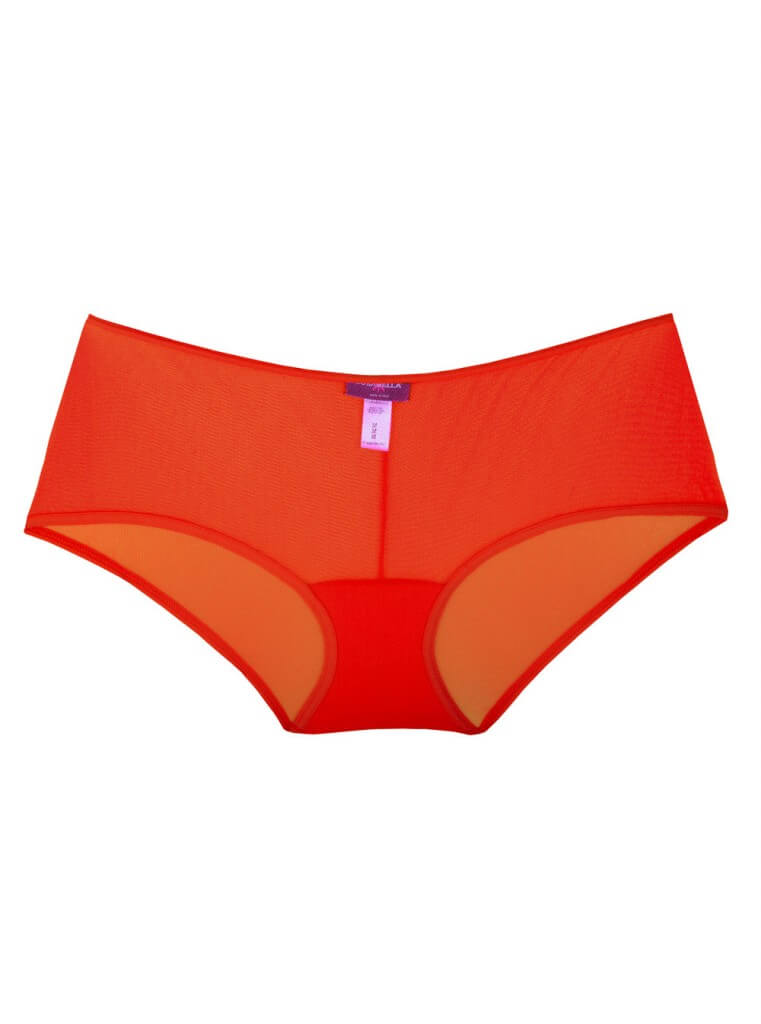 Cosabella seems to make a lot of thongs, which I tend not to wear, but luckily they also had a hotpants option to suit me. The first thing I noticed on the Soire New Hotpants was the closed gusset construction. One end had the seam allowance hidden (sandwiched into the construction), the other was finished with a neat overlock that tacked it to the adjacent panel. Often boyshort styles will have the ends of the crotch gusset untacked, which tends to make the fabric roll and collapse with wear, so this tidy construction was definitely a pleasant surprise. Again, the elastic seemed a little flimsy --- it looked like it rolled a little bit as it was being attached, which translated into it not laying quite flat when I put the panties on. This is the same elastic that edges most of the bra, possibly a narrower version of the elastic that comprised the band. The cut was cute --- nice and wide without being an awkward mid-rise, the rear coverage fairly modest without being matronly. Unlike the bra, the panties have only a single layer of the soft, lightweight mesh. I found them very comfortable for all-day wear, not digging in or itchy at all (always a concern with synthetic fibers). I didn't notice the panties tending to fall down or ride up --- who likes high maintenance underwear? No one. No one likes high maintenance undies. Speaking of which, I just popped them in the washer and dryer on the delicate cycle and they seem to have emerged just fine. I would recommend the Soire New Hotpants as a good style for everyday wear, especially since they are available in a wide assortment of colors. 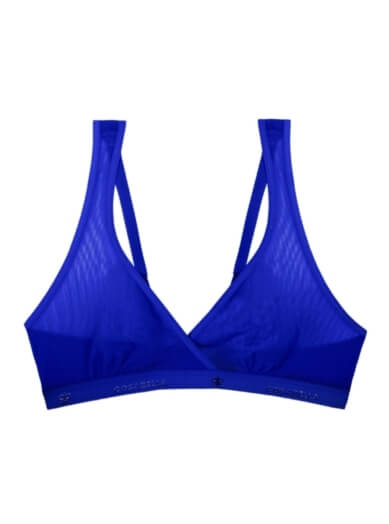 Soire New Soft Bra by Cosabella, in the shade of electric blue that I received.

Overall I was pleased with the design and quality of the Cosabella Soire set, though disappointed with the sizing of the bra. Have you tried Cosabella before? What do you think of the styles I looked at today? Share your experiences and thoughts in the comments below!