Lingerie & The Movies: Elizabeth Taylor in Cat on a Hot Tin Roof & Butterfield 8 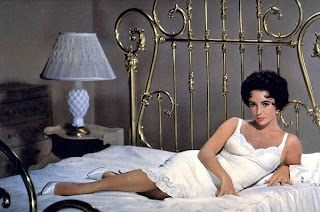 This second installment of Lingerie & The Movies is by Clarabela. Clarabela writes about her love of movies at JustChickFlicks.com and is a regular contributor to DignityZine. Contact Clarabela at [email protected]

It is one of the most iconic images in cinema history. The sultry and beautiful Elizabeth Taylor lounging on the brass bed Cat on a Hot Tin Roof

wearing nothing but a full white slip and high heels. Liz made the white full slip sexy!  Believe it or not, this was considered provocative to 1958 movie goers. In fact, designer Helen Rose had to construct a special fully lined garment for Taylor, to ensure there would be no show-through.

Based on the Pulitzer Prize-winning play by  Tennessee Williams, Cat on a Hot Tin Roof tells the story of a southern family in turmoil. The movie stars Elizabeth Taylor as Maggie (aka Maggie the Cat), the sex-starved wife of Brick, played by Paul Newman, who wears  pajamas for the entire movie. In the movie, Elizabeth Taylor spends a lot of time wearing this sexy white lace slip while trying unsuccessfully to seduce her alcoholic and sexually confused husband. To comply with the Hollywood Production Code, during the repressed 1950s all references to Brick's homosexuality in the original play were removed from the movie. If you have seen the movie, that will answer the question: How could he resist Maggie's advances in this sexy lace slip?
The Full Slip in Movies 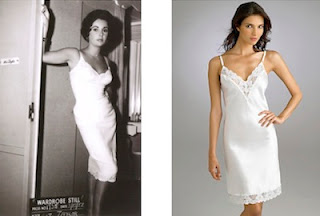 In this wardrobe still from Cat on a Hot Tin Roof,  Liz is wearing the white slip she made famous. The modern-day version from Farr West is a nice way to recreate the look. 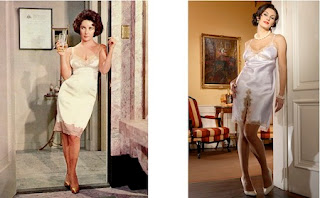 In the movie Butterfield 8

Liz plays a call girl and appears in an even sexier slip. The vintage look of this lace-trimmed satin slip from Secrets In Lace is a great recreation, just right for wearing under short skirts or dresses. In the Golden Age of Hollywood, women wearing a full slip was a common image of sexuality. With censorship in full force, actresses like Liz Taylor in Cat on a Hot Tin Roof and again in Butterfield 8, Jean Harlow and others boldly appeared on-screen in silky full slips. Recently, Naomi Watts (King Kong), Reese Witherspoon (Walk The Line) and Sanaa Lathan (Something New) have also appeared on-screen in a full slip.

The Return of The Full Slip

Back in my mother's or my grandmother's day, no proper lady would dare leave home without wearing a slip under her outfit. The slip was the required undergarment to avoid show-through on sheer summer dresses.
Thanks to the return of the dress, the demure and feminine silhouette of a silky full slip is also making a comeback. Unlike the dreaded half-slip, which always seems to hang below the hemline of my skirts, the full slip is the perfect undergarment when I am wearing clingy or sheer tops and dresses. I also really love the feminine feeling of wearing a silky slip under a business suit.
<style="text-align: left;="">Have you seen Cat on a Hot Tin Roof or Butterfield 8?  What are some other movies that feature an actress in a full slip?