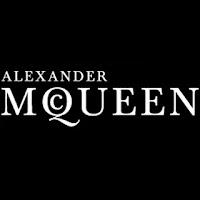 Confession time: today's Lingerie Battle Royal is actually a last minute substitute. I was going to write about the Agent Provocateur "Whip Me" Stockings

and the ASOS "Love Seam" Tights... but between when I discovered the tights and when I decided to post them, they sold out. Bummer. Hopefully, ASOS will restock soon, and if they do, you can be sure I'll let you know on my Facebook and Twitter.

In a way though, I'm kind of glad the ASOS tights sold out because today's Look for Less feature is a pretty major fashion find.  ;) 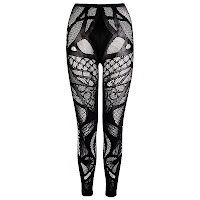 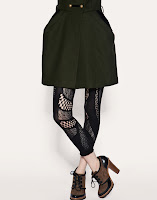 In the left corner, we've got Alexander McQueen's uber-rare, super limited edition lace leggings. Retailing for the not-small sum of $107 at AlexanderMcQueen.com (and that's the sale price!) these patchwork leggings are on their way to becoming collector's items. Undoubtedly, Alexander McQueen's untimely death early last year has something to do with this as lace leggings were one of the last looks he featured.

In the right corner, we have Jonathan Aston's Heavy Ornamental Net Leggings. Jonathan Aston is actually one of my favorite hosiery brands, and that's because he's able to take high end, runway designs and translate them into affordable prices for the High Street buyer (to borrow a British phrase). These leggings are more expensive than his usual offerings, they're still a bargain compared to Alexander McQueen at only $51.72.

Now it's time for you to decide, dear readers. Are these leggings a purchase... or pass?