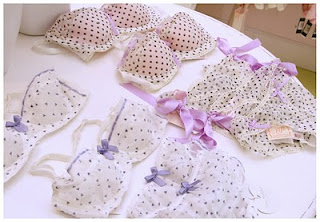 Two years ago, I backpacked for a few months across Western Europe. One of the things I noticed right away was how much European women enjoyed lingerie. Not only did they wear things like hosiery on a daily basis, there were lingerie boutiques on literally every corner. Being a lingerie addict, I felt like I'd died and gone to heaven. As a matter of fact, I bought so much that on my return trip I had trouble convincing customs I wasn't a shopowner trying to sneak by!

Fast forward to today and the United States is still very different from Europe when it comes to lingerie. Whether you look at brands, boutiques, or styles... there's simply more going on "across the pond." Just last week, while attending CurveNY (a lingerie tradeshow), I noticed some pretty profound differences between US- and EU-based designers. American designers focused on practicality, comfort, and "the basics." European designers were all about art, innovation, and experimentation.

I asked for your opinion on the reasons behind these differences and received some great responses. Here's what a few of you had to say about American women and lingerie on my blog, Facebook, and Twitter.* Didn't get a chance to contribute to the discussion? Share your thoughts in the comments below!

Stacey--
I think that American women don't enjoy lingerie as much as European women it has its origins in America's puritanical founders. Some girls think sexy is wearing a matching set, and that garters and stockings are for strippers and prostitutes. Women I know also tend to think that anything other than a bra and panty is too expensive and too complicated. It doesn't help that it's impossible to find anything special in regular stores. It does get kind of annoying to have to order things online any time I want stockings or fancy lingerie.

Orilonise--
The reason, imho, is that Americans are focused on simple, efficient styles--t-shirt and jeans--which aren't really conducive to glamour. Corsets and garters aren't really efficient or modern by American standards. Lingerie requires time, thought, and a little money.

Petra--
Here [in America], feminism was more of a battleground issue in the 60's and 70's and remains so today than in Europe. Perhaps in the quest for "equality" the reflex for really overt displays of femininity was lost or weakened here.

Katie--
Stacy had it right. Americans are more puritanical. You mentioned Kriss Line bras going to K cups, while Bra Smith is using crazy sizing like 345D because heaven forbid any woman be larger than a D. It's also why 85% of women in the U.S. are still wearing the wrong sized bra. Here lingerie means sex, and sex is for bad girls.

Aline--
I think the mind set of Americans in buying lingerie has yet to be changed, the culture teaches that Valentine's Day is the only special time of the year to "splurge" in lingerie. Also I find American women to like loungewear and uncomplicated basics styles more due to the lifestyle which is more in a faster pace than for Europeans. I think American women has yet to become more feminine which it will lead them to appreciate beautiful lingerie much more.

Gwendolyn--
Americans are too uptight and closed minded when it comes to lingerie, they automatically equate sex to lingerie and in the mind of some it's dirty. You don't have to be headed to the bedroom to wear nice, sexy lingerie.

Layla--
I think Europeans relax and enjoy life a lot more, and lingerie and loungewear are definitely for those moments. American women are very work or activity oriented, and the lifestyle dictates the wardrobe so the basics are in high demand, which leaves less room for the fashion, frills, and fun of "european" lingerie.

*Some comments edited for length, grammar, or spelling.